Now, in a new interview with People magazine, Shelton rethought Cyrus offer and took aim at his fellow former Voice coach, Levine, in the process. 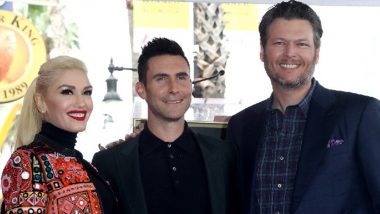 Earlier, Popstar Miley Cyrus offered to be the singer for Blake Shelton and Gwen Stefani's upcoming wedding. Now, in a new interview with People magazine, Shelton rethought Cyrus offer and took aim at his fellow former Voice coach, Levine, in the process. Fox News quoted the 44-year-old singer in an interview to People Magazine, saying, "Miley is one of the most talented singers I have ever met. She drives me crazy because she's a lot like Kelly [Clarkson] in the way that they can burst out with this voice." It’s Official! Gwen Stefani and Blake Shelton are Engaged.

"If I'm going to sing, I have to think about it and go warm up. It's unfair," the 'Happy Anywhere' singer lamented. "Gwen was showing me that she even said, 'I promise to be on my best behaviour. I've known Miley long enough [for her to have to say], 'By the way, I'll be nice when I get here.' So that was nice of her," Shelton continued. Shelton then revealed that he would also like to see Levine's band, Maroon 5, perform at the wedding, simply because it'll "cost" the 41-year-old singer Levine. Gwen Stefani Wants Blake Shelton to Skip Meat in His Diet to Lose Weight.

"I don't know what we're going to do, but I still say Adam owes me a full-band performance with Maroon 5, mostly because I want it to cost him. I would rather have Miley as a human being," Shelton humorously stated. Per Fox News, earlier in the interview, Shelton reflected on his initial meetings with the 51-year-old songstress Stefani, when the 'No Doubt' vocalist joined the 'Voice' cast during season 7 -- noting his surprise when he realised that Stefani drives a minivan.

"She had just had a baby [Apollo, with Gavin Rossdale], so there wasn't even much of a friendship that first season. The thing I remember saying about her when people would ask was, 'Oh my God, that girl is unbelievable. She drives a minivan to work!" I thought rock stars drove Rolls-Royces, and Gwen was driving a black minivan," said the country crooner.