Ever since the trailer of Brahmastra launched, the internet has been swooning over not just the film but also Ranbir Kapoor and Alia Bhatt's romance in it. The film has received a great response online and Ayan Mukerji is feeling the love. He took to Instagram and shared a heartfelt note thanking everyone for their support. 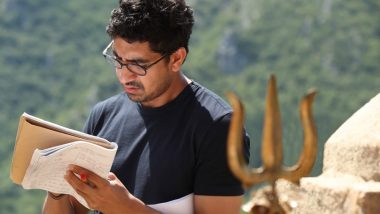 Bollywood director and producer Ayan Mukerji, took to his Instagram account, to share a heartfelt to thank the audience for the extraordinary responses to the Brahmastra trailer. The note reads " Hello everyone, Yesterday was a very very very big moment in the Brahmastra journey and with the launch of our Trailer. A deeply heartfelt THANK YOU for the love, encouragement, and excitement that the trailer is receiving. It means everything to me. I feel so energised today- as we enter this last lap leading up to our film's release. We will give all that energy and more...our absolute best- to give you guys- a new amazing cinematic experience with Brahmastra...one that I hope you will feel proud of. September 9th- here we come! With love, light, and gratitude, - Ayan & Team Brahmastra" Brahmastra Trailer: Ayan Mukerji’s Film Gets Big Thumbs Up From Audience, Karan Johar Says He’s a Proud Parent.

After almost a decade director Ayan Mukerji is back with his high-on VFX film Brahmastra which stars Ranbir Kapoor, Alia Bhatt, Amitabh Bachchan, Nagarjuna, and Mouni Roy in the lead roles.

The trailer of Brahmastra got an amazing response from the netizens for the spectacular visuals and high-octane stunts. Fans praised Ayan for creating something new that the majority of the Indian audience have never experienced on the big screen.

After the launch of the trailer, the excitement for the film among the fans has increased to the next extent and fans just can't wait to experience this cinema at the theatre. The trailer is trending on YouTube and is the hottest topic of discussion all over social media. Brahmastra Trailer: Neetu Kapoor Is All Hearts For Ranbir Kapoor And Alia Bhatt’s Roles In The Upcoming Film!

Actors and couple Ranbir Kapoor and Alia Bhatt will be seen together for the first time on the big screen in Brahmastra. The film was in limelight from the very day it was announced and it took over four years to get the production work done for this film, now after getting much delay due to various reasons, the film is ready to hit the theatres on September 9, 2022, in 2D and 3D.