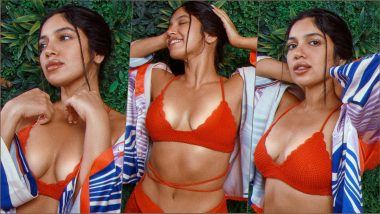 Mumbai, July 3: 'Dum Laga Ke Haisha' actor Bhumi Pednekar set the temperatures soaring with her latest pictures she shared on social media, looking like a diva. "Birthday Month," captioned Bhumi on Instagram, adding a crab emoji indicating that July marks her birthday and she belongs to the Cancer zodiac sign. From Priyanka Chopra Jonas, Bella Thorne to Selena Gomez– Bikini Ideas From Our Hollywood Hotties To Look Sexy at the Beach!

In the first picture, the actor looked quite dreamy, donning an orange-textured bikini top, knotted down the waist, as Bhumi struck an appealing pose with eyes closed and hands behind her head. She had worn a multi-coloured satin shrug on top of her swimsuit which had wave-like patterns. Bhumi acted coy in the second picture, seemingly hiding her face with both hands, smiling broadly. She kept her hair in a bun, however, she braided a small lock of hair which looked quite unique. Fashion Faceoff: Hina Khan or Bhumi Pednekar, Who Wore This Tarun Tahiliani Corset Dress Better?

In the third picture, Bhumi surely stole the hearts of her fans with a piercing look, as she posed in front of the camera, placing both her hands behind her neck. Her no-makeup makeup look, with a shiny nude lipstick shade, enhanced her looks further.

Meanwhile, Bhumi, who was last seen in 'Badhai Do' alongside Rajkummar Rao now has another exciting project for her fans. She recently shared a video from Jodhpur where she mentioned that the shooting for her next film 'Afwaah' has begun. In the film, Bhumi will be seen playing the lead character alongside Nawazuddin Siddiqui.

'Afwaah' is a thriller and is being directed by celebrated director Sudhir Mishra. Produced by Bhushan Kumar's T-Series and filmmaker Anubhav Sinha's Benaras Mediaworks, the film is a film based on a novel story rooted in the heartland of India.

The actor would also star in Ajay Bahl's 'The Lady Killer', a suspense drama, which revolves around a small town playboy who falls in love with a self-destructive beauty as they embark on a whirlwind romance. The film also stars Arjun Kapoor in the lead role.

Apart from 'The Lady Killer', on the film front, Bhumi has 'Govinda Mera Naam', 'Raksha Bandhan', 'Bheed', and 'Bhakshak' on her list as well.