Netflix's romantic period drama 'Bridgerton', which became an instant hit, has been making headlines after the show's breakout star Rege-Jean Page announced his departure from the series. And now the show's executive producer Shonda Rhimes broke her silence over fans' reactions to Page's exit. 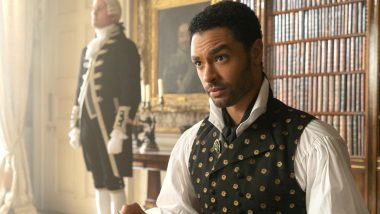 Netflix's romantic period drama Bridgerton, which became an instant hit, has been making headlines after the show's breakout star Rege-Jean Page announced his departure from the series. And now the show's executive producer Shonda Rhimes broke her silence over fans' reactions to Page's exit. The actor's departure has left many viewers disappointed, with some even suspecting that the writer would have killed his character Simon Basset in the forthcoming season. Several speculations about his exit have been going around since then. Breaking the silence on all of the self-woven theories, the show's executive producer Rhimes responded to all the fans during an interview. Bridgerton: Rege-Jean Page Opens Up About Why He Will Not Be Returning for Season 2.

According to People magazine, Rhimes admitted that she was not prepared for the way in which fans reacted to the actor's departure from the series. "I was really shocked because usually, that happens when I've killed off somebody that's been around for a while. Like, we didn't kill him, he's still alive," she said, in an interview, on Tuesday. "Rege-Jean is a powerful, amazing actor and that meant we did our job -- every season, our job is finding the right people and putting together this incredible, world-shifting romance," Rhimes added. Bridgerton Season 2: Rege-Jean Page Not Returning to the Popular Netflix Show Leaving Fans Disheartened.

People reported that the 51-year-old said she didn't know she will get this much of an explosion, given the fact that every book in the 'Bridgerton' series is a different romance. "What would be the ever-after of this combo? I mean, really: What would Rege-Jean do, you know what I mean? We gave them their happily ever after! And now we have this next couple coming. And so yeah, I was like, 'Whoa!," she added. Rhimes further explained that it is her job to find men who audiences find devastatingly attractive that they eventually "become incredibly overly attached to and they get enraged about when we move them about in any way."

Earlier this month, Page confirmed his exit from the show by posting a heartfelt note on his Instagram handle. The 31-year-old who became a breakout star after playing Simon Basset, on the acclaimed Netflix series, wrote, "It's been an absolute pleasure and a privilege to be your Duke. Joining this family -- not just on-screen, but off-screen too. Our incredibly creative and generous cast, crew, outstanding fans -- it's all been beyond anything I could have imagined. The love is real and will just keep growing."

Shortly after he confirmed the news, Rhimes also hopped on to her Instagram account to remind fans that, "The Duke is never gone. He's just waiting to be binge-watched all over again. #ShondalandMenOnNetflixAreForever," she wrote at the time. 'Bridgerton', created by Chris Van Dusen and based on author Julia Quinn's book series of the same name, premiered on Netflix last December. 'Bridgerton' follows the esteemed families of British high society and their romantic pursuits through the lens of a mysterious gossip columnist, Lady Whistledown (voiced by Julie Andrews).

After breaking streaming records, the show was renewed for a second season in January. Production on the show's sophomore outing began in London in March. On Tuesday, the official 'Bridgerton' social media accounts announced that the drama has been renewed for the third and fourth seasons. The second season of the series will draw from the sequel in Quinn's romance series, 'The Viscount Who Loved Me', which follows the quest of Daphne's brother, Lord Anthony Bridgerton, to find his viscountess. The first season of the romantic period drama focused on the steamy courtship between Daphne Bridgerton (Phoebe Dynevor) and Simon Basset, the Duke of Hastings (Rege-Jean Page).