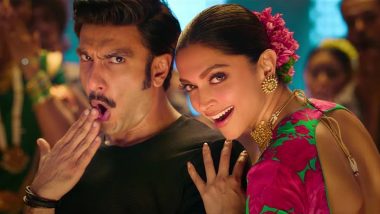 Set in the 1960s, Cirkus trailer revolves around Ranveer in a dual role, with both the twins unaware of each other's existence. Varun Sharma too plays a double role in this family entertainer. While Ranveer has two love interests in Pooja and Jacqueline already, he is joined by actor-wife Deepika Padukone for a song in the trailer. Deepika will be seen dancing in a special song with Ranveer.

Watch The Trailer Of Cirkus Below:

With the trailer, Rohit also gives a hint of the new universe he is planning to create with the Golmaal franchise. The trailer gives us a small glimpse of what one can expect watching the movie. While some liked the trailer, there's a section of social media users who found it average. Cirkus Teaser: Ranveer Singh – Rohit Shetty’s Film All Set To Take You to the ’60s! (Watch Video).

Cirkus marks Ranveer and Rohit's third collaboration after Simmba (2018) and Akshay Kumar-starrer Sooryavanshi, where Ranveer made a cameo appearance. The film is scheduled to release on December 23.