The makers of upcoming movie Cirkus unveiled its teaser on Monday. The film marks Ranveer Singh's third collaboration with Rohit Shetty after Simmba and Sooryavanshi, where he had an extended cameo appearance. 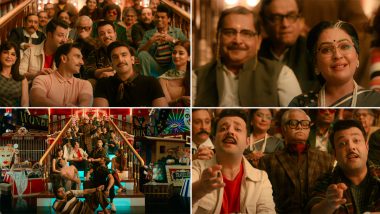 The teaser features a bunch of Rohit Shetty regulars such as Sanjay Mishra, Ashwini Kalsekar, Mukesh Tiwari, Marathi actor Siddharth Jadhav along with Jacqueline Fernandez, Pooja Hegde and Varun Sharma. Both Ranveer and Varun seem to be playing dual roles in the film.

Watch The Teaser Of Cirkus Below:

The teaser not just announces the date (December 2) when the trailer would drop, but also said the film will be released during Christmas this year. With 48 seconds of runtime, the teaser packs in signature Rohit Shetty entertainment as it makes past references to his films. It also indicates that the film will be set in the 1960s. Cirkus: Makers Drop First Look Of Ranveer Singh, Pooja Hegde, Jacqueline Fernandez and Others Ahead Of Its Trailer Launch (View Motion Poster).

The film is an important one for Ranveer as his last two films - '83 and Jayeshbhai Jordaar - did not perform well in the box office. Also on Ranveer's plate is the Karan Johar directorial Rocky Aur Rani Ki Prem Kahani in which he will share the screen with Dharmendra, his Gully Boy co-star Alia Bhatt, Jaya Bachchan and Shabana Azmi.

(The above story first appeared on LatestLY on Nov 28, 2022 01:45 PM IST. For more news and updates on politics, world, sports, entertainment and lifestyle, log on to our website latestly.com).