Fawad Khan finally returned to screen after a long hiatus and fans are extremely excited. This is the third time a Bollywood celebrity has been in a Marvel film. The first time being Irrfan Khan in The Amazing Spider-Man and Farhan Akhtar also having a cameo in Ms Marvel. 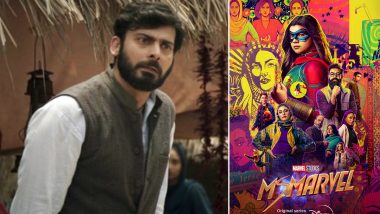 And the wait is finally over! Pakistani superstar Fawad Khan has made a grand entry in Ms. Marvel show with its fifth episode. Fawad essays the role of a freedom fighter in the British Raj who falls in love with Aisha, a woman from another dimension who is attempting to return home. Hasan and Aisha, played by actress Mehwish Hayat, are Kamala's great-grandparents. Ms Marvel: From Salman Khan’s Joote Do Paise Lo to Aishwarya Rai’s Tere Bina, All Bollywood Songs Played During Third Episode of Iman Vellani’s Disney+ Show!

After seeing Fawad's special appearance in the show, fans from India and Pakistan flooded social media with their reactions. "Fawad Khan's acting was amazing in #MsMarvel Episode 5, the expressions were brilliant and the struggle to get independence from British and the pain in his eyes when talking to Muslims was real," a netizen commented.

"Ladies & gentlemen Fawad khan in MARVEL," another one tweeted.

"He single handedly owned the episode," a Twitterati wrote. Ms. Marvel is an action series about a young teenage girl and is the first-ever Asian superhero character from the Hollywood production house, Marvel. Disney+ Hotstar streams new episodes of the series once a week, every Wednesday. Ms Marvel Episode 4: Farhan Akhtar’s '5-Minute Cameo' as Waleed in MCU Show Leads to Funny Memes and Jokes Online!

Along with Fawad Khan, the MCU's series also casts Indian actor Farhan Akhtar in a prominent role, and it is the second time an Indian celebrity is a part of a Marvel film after actor Irrfan Khan in The Amazing Spider-Man in 2012.