Thinking Of Him: Film on Rabindranath Tagore's Relationship With Argentine Author to Be Released on May 6

A film that explores the relationship between Rabindranath Tagore and Argentinian author Victoria Ocampo during the ailing poet's stay in Buenos Aires in the 1920s is all set to hit the screens across India on Friday. 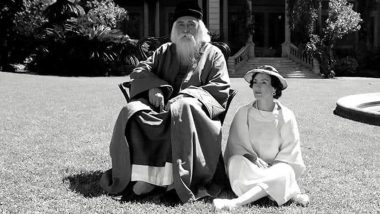 A film that explores the relationship between Rabindranath Tagore and Argentinian author Victoria Ocampo during the ailing poet's stay in Buenos Aires in the 1920s is all set to hit the screens across India on Friday. The Indo-Argentinian movie, ‘Thinking of Him', is directed by Pablo Cesar, a filmmaker from the Latin American country. Ahead of Top Gun: Maverick Release, Tom Cruise’s Old Clip From the 90s Saying the Film’s Sequel Would be Irresponsible Resurfaces.

The film, starring Victor Banerjee in the role of Tagore and Argentinian actor Eleonora Wexler as Ocampo, was co-produced by award-winning Indian director Suraj Kumar. Besides, it has Raima Sen and Hector Bordoni in pivotal roles. Thinking of Him had a special screening at the Indian Council for Cultural Research (ICCR), a central government organisation responsible to promote cultural exchanges with other countries and people, in Kolkata on Wednesday. DC League of Super-Pets Trailer 2: Dwayne Johnson’s Krypto Forms His Own Team to Save the Justice League in This Promo For DC’s Animated Film! (Watch Video).

"She was half his age when they met, but there was something beyond mere admiration in their relationship. It was, of course, Victoria who organised Tagore's first art exhibition in Paris in 1930," Victor Banerjee said. Tagore was 63 when he met Ocampo and the 34-year-old writer took good care of the ailing bard during his 58-day stay in Argentina. “The film is about what Victoria Ocampo thought of Tagore and it is not about what you and I think of Tagore. As part of my preparation, I had to understand how much she really felt for him as a woman, and as an intellectual," said the veteran actor who had starred in Satyajit Ray directed 'Ghare Baire' (The Home and the World, 1984), based on a Tagore novel.

Suraj Kumar said it is a matter of delight that the film is finally getting released across India and that too on the occasion of Tagore's 161st birth anniversary on May 8. "We have really been fortunate to have someone like Pablo Cesar at the helm and none other than Victor Banerjee in the central role of Tagore," he said. The producer said, after reading the French translation of ‘Gitanjali' (Song Offerings), the book of poems that won Tagore the Nobel Prize in 1913, Ocampo idolised him and when he fell ill during his Buenos Aires visit in November 1924, she had taken care of him.

Stills From the Film

Ocampo rented a mansion in Buenos Aires suburb and put up Tagore there. From his balcony, the wide sea-like Plata river and a large garden could be seen. The poet left the Argentine capital on January 3, 19a25, after fully recovering from his illness. “It was a unique experience to shoot in India. I have known India since 1994, although it is difficult to know all of India. But over the years I have understood many things about the idiosyncrasies and behaviour of people from many places in India, a country that I personally admire,” Cesar said.