Bollywood star Kangana Ranaut on Saturday informed her fans via a social media post that she has tested positive for COVID-19 and is currently under home quarantine. 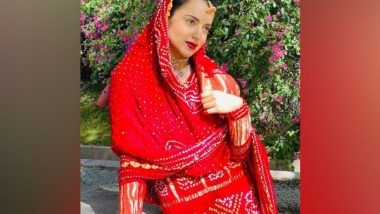 Mumbai, May 8: Bollywood star Kangana Ranaut on Saturday informed her fans via a social media post that she has tested positive for COVID-19 and is currently under home quarantine.

The 'Queen' actor confirmed the news through her Instagram handle.

"I was feeling tired and weak with slight burning sensation in my eyes for past few days, was hoping to go to Himachal so got my test done yesterday and today the result came I am covid positive," she wrote.

Informing her fans that she has quarantined herself, Kangana further said that she is certain, she will demolish the virus soon.

"I had no idea this virus is having a party in my body, now that I know I will demolish it, people please don't give anything any power over you, if you are scared it will scare you more, come let's destroy this Covid -19 it is nothing but a small-time flu which got too much press and now psyching few people. Har Har Mahadev," Kangana wrote.

The 34-year old star has been making headlines because of her controversial comments on the recently held West Bengal elections won by Mamta Banerjee. In order to protect their terms and policies, Twitter permanently suspended her account on May 4.

After being suspended on the micro-blogging site, Kangana shifted to post the same content on her Instagram. Following this, a new FIR was filed against her by an activist and spokesperson Riju Dutta for allegedly spreading hate propaganda and inciting communal violence in West Bengal.

Meanwhile, on the work front, Kangana's much-awaited project 'Thalaivi' which was slated to get a theatrical release on April 23, this year got postponed due to the rise in the number of COVID-19 cases in India. Apart from this she also has 'Tejas', 'Dhaakad', and 'Manikarnika Returns: The Legend Of Didda' in the pipeline.

Kangana has also signed up to play the role of former Prime Minister Indira Gandhi in an upcoming political drama.