Ahead of the highly anticipated release of Shah Rukh Khan starrer Pathaan, Katrina Kaif on Tuesday asked audiences to not give out spoilers. 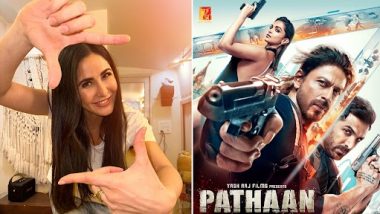 Ahead of the highly anticipated release of Shah Rukh Khan-starrer Pathaan, Katrina Kaif on Tuesday urged audiences to not give out spoilers. Taking to Instagram Story, the actor posted a still from her movie Tiger 3 along with a caption, "My friend Pathaan is on a dangerous mission. It is very important in the interest of national security that you don't reveal anything about this. You are all part of this classified mission now. Zoya." Pathaan Review: Shah Rukh Khan, Deepika Padukone, John Abraham's Film Is a Winner As Per Netizens.

SRK will be returning back to the cinemas after a hiatus of 4 years with his upcoming action thriller film Pathaan which is all set to hit the theatres on Wednesday. Pathaan, the film is a part of Aditya Chopra's ambitious spy universe and has the biggest superstars of the country - Shah Rukh, Deepika Padukone and John Abraham in lead roles. The film also stars Dimple Kapadia and Ashutosh Rana in pivotal roles.SRK is paired opposite Deepika in the film. He and Deepika are one of the biggest on-screen pairings in the history of Indian cinema and have worked in films like Om Shanti Om, Chennai Express and Happy New Year.In this film, Salman Khan is featured in a cameo. Talking about Tiger 3, it will have Salman reprise his role of R&AW (Research & Analysis Wing) agent Avinash Singh Rathore aka Tiger, while Katrina will be seen playing the female lead, Zoya. Pathaan Beats KGF 2! Shah Rukh Khan's Film Sells 5.56 Lakh Tickets in Advance Booking for Its Opening Day.

Katrina Kaif's Message For The Audience About Pathaan: 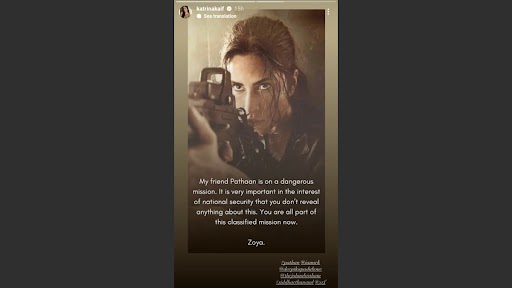 The first film of the popular franchise called Ek Tha Tiger came out in 2012 and was directed by Kabir Khan. The film received an overwhelming response and was a massive success at the box office. The second movie, Tiger Zinda Hai, was released in 2017 and was directed by Ali Abbas Zafar. Salman and Katrina have featured in both instalments of the franchise. Both films come under Aditya Chopra's ambitious spy universe.Apart from Tiger 3, Katrina will also be seen in director Sriram Raghavan's upcoming film Merry Christmas alongside south actor Vijay Sethupathi.