Meghan Markle and Prince Harry have accepted the President's Award in recognition of special achievement and distinguished public service at the NAACP Image Awards on Saturday. 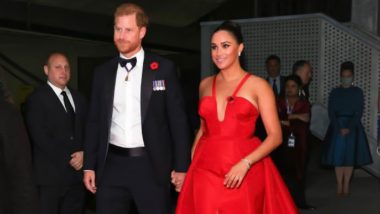 Through the couple's Archewell Foundation, which they launched in 2020, Harry and Meghan have supported efforts to tackle the COVID-19 pandemic and focused their attention on the Black Lives Matter movement and fighting for racial justice. During the couple's speech, Harry thanked the Black community for "welcoming me so warmly," while Meghan, who brought her mom Doria Ragland to the awards show, said she "couldn't be prouder." Elizabeth Taylor Birth Anniversary: From A Place in the Sun to Cleopatra, 9 of the Actress' Best Movie Quotes to Check Out!.

"It's inspiring to think about the legacy of the Image Awards, which began shortly after the Civil Rights Act of 1964 and the Voting Rights Act of 1965 were passed into law," Meghan said after the couple walked on stage together. "Today, we can continue that legacy by re-establishing federal voting protections in our country and fulfilling the work of civil rights giants, like the late John Lewis."

She added, "We are so deeply humbled to be here in the company of so many illustrious awardees." Harry said, "Before I begin, we would like to acknowledge the people of Ukraine, who urgently need our continued support as a global community. I also echo the immense gratitude for tonight, both for this award and this community for welcoming me so warmly. I think it's safe to say that I come from a very different background from my incredible wife, yet our lives were brought together for a reason. We share a commitment to a life of service, a responsibility to combat injustice and a belief that the most often overlooked are the most important to listen to."

Meghan then said, "And I couldn't be prouder that we're doing this work together. We moved to California, my home state, shortly before the murder of George Floyd. For Black America, those nine minutes and 29 seconds transcended time, invoking centuries of our unhealed wounds. In the months that followed, as my husband and I spoke with the civil rights community, we committed ourselves and our organization, Archewell, to illuminating those who are advancing racial justice and progress."

The couple, who wore ensembles by Black designers (Meghan's flowing blue gown is by Christopher John Rogers, while Harry's tux is by Ozwald Boateng), also teamed up with the NAACP on a new annual award, the NAACP Archwell Digital Civil Rights Award, which will recognize leaders creating transformational change -- at the intersection of social justice and technology -- to advance civil and human rights. The awards show appearance marks Meghan and Harry's first major Hollywood moment since moving to California in 2020. Other attendees at the awards show included Zendaya, Mary J. Blige, Michael Strahan, Tiffany Haddish, Questlove, Morgan Freeman, Kerry Washington and more.

Meghan and Harry, who are parents to two-year-old Archie and eight-month-old Lili, have made a handful of public appearances since relocating to California, where Meghan was born and raised. At the start of the pandemic, they quietly volunteered throughout the Los Angeles area, bringing meals to those in need and helping at a back-to-school drive. Earlier this month, Harry made a surprise appearance at the Super Bowl alongside his cousin, Princess Eugenie, who was visiting the couple with her husband Jack Brooksbank and their one-year-old son August.