Actor Michael B. Jordan recently revealed his plans for carving out a role for his mentor--Oscar-winning actor Denzel Washington in the Marvel Cinematic Universe. 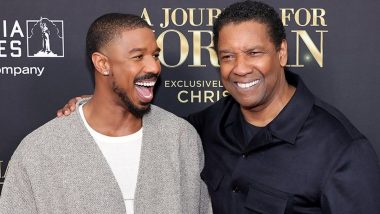 Actor Michael B. Jordan recently revealed his plans for carving out a role for his mentor--Oscar-winning actor Denzel Washington in the Marvel Cinematic Universe. As per People magazine, Jordan and Washington recently sat down for a question and answer session with fans, in order to promote their new movie A Journal for Jordan.  Human Review: Shefali Shah and Kirti Kulhari’s Disney+ Hotstar Series is a Terrifying Watch But Not in the Correct Sense! (LatestLY Exclusive).

During the session, one fan asked the 34-year-old star if he wanted Washington to star in a Marvel film. "Yes! No hesitation. I actually got some things in mind, but yeah!" Jordan, who starred in Marvel's 'Black Panther', said. "You better hurry! I know! But I got you. I got some ideas for that," the 'Creed' actor added. Hotel Transylvania Transformania Movie Review: Andy Samberg and Selena Gomez's Animated Film is a Loud, Uninspired Showing With Some Decent Animation (LatestLY Exclusive).

Washington also joked, "Hey! Concentrate on one thing. I sound like [a] dad,"

The two shared a hearty laugh while Jordan continued, "After I finish Creed III, you know what I'm saying? Once I finish that project my mind can wander on [to] other creative things." According to People magazine, Washington directed Jordan in their latest film which is based on the true story of a soldier who writes a journal for his infant son after he is deployed to Iraq.

The Oscar-winning actor told that he knew Jordan was the right person for the role after becoming a fan of him in 2013 for his breakout performance in 'Fruitvale Station.' "The IT factor is just that - there really is no name for it, you just know it when you see it," Washington said about Jordan during the interview.

Jordan cited Malcolm X as one of his favourite films from the older star.

"That was one of the movies my dad wanted us to watch and I remember being captivated by the entire performance. It was incredible. It was just strong, I get chills. It was that powerful. To see him transform into him I was like, 'Man, I want to do something like that.' That was a moment for me," Jordan said. A Journal for Jordan was released in theatres on December 25, 2021.