American singer and songwriter Miley Cyrus would be bidding adieu to her Plastic Hearts era and is all geared up for her next project, one that will take inspiration from the change in both her personal and professional life. 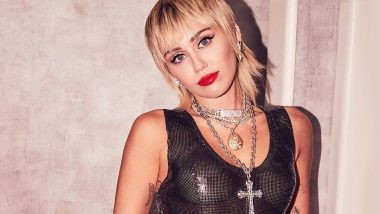 American singer and songwriter Miley Cyrus would be bidding adieu to her Plastic Hearts era and is all geared up for her next project, one that will take inspiration from the change in both her personal and professional life. According to People magazine, the 'Wrecking ball' hitmaker told her fans about the update in a handwritten letter she wrote on MileyWorld.com. Rana Daggubati Teams Up With Aval Director Milind Rau for a Supernatural Thriller.

"There has been intense spurts of change in my life personally + professionally (which always co-exist). I am so [excited] to channel these experiences + use them as inspiration in my next body of work! I am so grateful to never go through these transitional times alone because I have [you]!" she penned. The letter comes as part of a nostalgic reboot of the password-protected website she used the communicate with fans during her Disney Channel era. Along with the letter, Miley shared her over-an-hour-long set at Austin City Limits for fans who couldn't join her in real life. The Big Picture: Ranveer Singh Is Moved by Gorakhpur Teacher's Journey, Makes a Video Call to His Mother to Appreciate Him.

"The setlist represents my evolution! It honors + celebrates every era!" she wrote, adding, "They are all so special to me! Mostly because you have been a part of it! Can't wait to create the next one for/with you! I love you forever!"

The singer has previously performed at several recent festivals and events, including the Austin City Limits Festival, where she played several throwback hits, including 'See You Again', 'The Climb' and '7 Things'. In an email to fans, she noted that MileyWorld is "currently under construction," and will "develop in real-time along with me and the next era that is currently being created."

Her seventh and most recent album, the glam rock, new wave-inspired 'Plastic Hearts', was released in November 2020. The project was a shift from her sixth album 'Younger Now', which featured a stripped-back, rootsier sound.

Cyrus has kept her personal life largely out of the public eye over the last year following high-profile break-ups with boyfriend Cody Simpson in August 2020, and husband Liam Hemsworth in August 2019. As per People magazine, after more than a year of lockdowns, Cyrus said during a July 4 performance in Las Vegas that it felt like her very first show.