Get latest articles and stories on Entertainment at LatestLY. American comedians Pete Davidson and Jon Stewart will be teaming up for a comedy show, the proceeds from which will go to the 9/11 terrorist attacks charities. 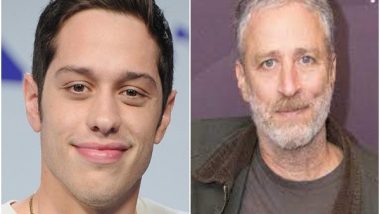 Washington [US], August 10 (ANI): American comedians Pete Davidson and Jon Stewart will be teaming up for a comedy show, the proceeds from which will go to the 9/11 terrorist attacks charities.

According to People Magazine, in honour of the 20th anniversary of the 9/11 terrorist attacks, the event 'NYC Still Rising After 20 Years: A Comedy Celebration' will take place at New York City's Madison Square Garden on September 12.

The event, produced by Live Nation, will feature a star-studded roster of comedians.

As per People Magazine, the upcoming event will require all attendees to provide proof that they are fully vaccinated against COVID-19 as cases surge in the country due to the delta variant.

Davidson and Stewart issued a joint statement on their respective social media accounts: "We wanted to put on a fun celebration to honour this great city's resilience. It's nice to be able to do this with friends and people we love."

On a related note, Pete Davidson has a personal experience with the 9/11 attacks which occurred in 2001. His father Scott Davidson, a New York City firefighter, died in service when the comedian was 7-years-old.

On the other hand, Stewart has also advocated for 9/11 victims in 2019. According to People Magazine, the comedian helped get the bill for the September 11th Victim Compensation Fund reauthorized after he delivered a passionate and emotional speech before Congress.

Reportedly, the bill allows 9/11 victims and their families to file claims with the fund up until 2090. (ANI)