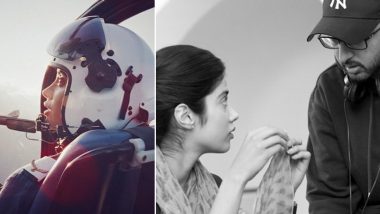 Gunjan Saxena: The Kargil Girl completed a year since its release on Thursday, and its lead actor Janhvi Kapoor is extremely nostalgic. Taking to Instagram, Janhvi penned a heartfelt note expressing her gratitude to director Sharan Sharma and former Indian Air Force combat pilot Gunjan Saxena, who entered the war zone during the 1999 Kargil War. The film is inspired by the life of the pilot.  Shershaah Full Movie in HD Leaked on TamilRockers & Telegram Channels for Free Download and Watch Online; Sidharth Malhotra And Kiara Advani's War Film Is the Latest Victim of Piracy?.

"Nothing I ever say will do enough justice to what this journey has meant to me. I could have never even dreamt of a creative process that felt so pure and enriching, in every way. And I'm so grateful for all the people that helped make it that way, and most of all to Gunjan Mam for letting us be privy to her spirit and her rare sincerity, something that continues to guide me and shape my outlook in everything I try to do," she wrote. "And Sharry, for recognising and making us all feel the importance of what this story stood for. You made trusting the process feel more fruitful than daunting, and that was more valuable than any reward we as a team could have asked for #GunjanSaxena," Janhvi added. Jackie Shroff Opens Up About His Upcoming Thriller Film ‘The Interview: Night of 26/11’.

Alongside the post, Janhvi posted a string of BTS images from the sets of the film, which also featured actors Pankaj Tripathi, Angad Bedi, Viineet Kumar, Manav Vij, and Ayesha Raza. Angad Bedi, who starred as Janhvi's brother in the movie, also celebrated the film's anniversary by sharing a heart-warming post on Instagram. "We completed a year to a film we all are soo proud off!! @sharanssharma sharry we made such lovely memories together. @janhvikapoor JK as gunjan was on top of her game. @pankajtripathi sir the loving father and the backbone of the film.

Made friends who shall never be forgotten!! @karanjohar thank you for putting faith in me for the part of #anshumansaxena @apoorva1972 @dharmamovies and my chacha bro @parth.dholakia till we meet again on another set... #1 yeartogunjansaxena," Angad captioned the post. Speaking more about the movie, it was released on Netflix last year and was surrounded by several controversies. The Indian Air Force had even complained to Dharma Productions, Netflix and the Central Board of Film Certification and objected to the negative portrayal of the force and the inappropriate portrayal of its work culture in the movie.