Monsoon 2020: 12 Killed in Rain-Related Incidents as Heavy Rainfall Batters Parts of Many States Across India 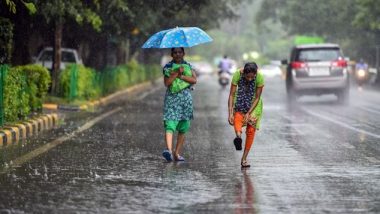 Three fishermen, who ventured into a river near Kochi in Kerala, were reported missing after their country boats capsized in the early hours of Wednesday, police said.

The mercury dropped slightly due to rains and settled at 35.4 degrees Celsius.

Major rivers in Uttar Pradesh continued to flow above the danger mark at some places of the state where 536 villages in 16 districts have been hit by floods, officials said.

The Sharda river in Lakhimpur Kheri's Palia Kalan, the Saryu river at Barabanki's Elgin Bridge, Ayodhya and Ballia's Turtipar, and the Rapti at Gorakhpur's Bird Ghat were flowing above the red mark. Five people -- three children and two women -- drowned when the boat in which they were crossing the overflowing Saryu (Ghaghra) river in Mau district capsized.

The ill-fated boat was coming towards Teliakala village from Mau district and due to the overflowing river it went out of control and overturned. Heavy rains lashed parts of Mumbai and neighbouring Thane and Palghar districts of Maharashtra, affecting some local train and bus services due to water-logging on rail tracks and roads, officials said. Rains also lashed Pune, Satara and Kolhapur districts in western Maharashtra, they said.

Dahanu in Palghar recorded over 350 mm rainfall in the 12-hour period ending at 5.30 am on Wednesday, while some areas in Thane received over 150 mm during the period, the India Meteorological Department (IMD) said. Water-logging was reported in low-lying areas of Chembur, Parel, Hindmata, Wadala and other areas of Mumbai.

South Mumbai was badly hit as heavy rains led to water-logging on several roads and low-lying areas and to make the situation worse, several trees fell due to gusty winds, damaging vehicles, officials said. A five-year-old girl was rescued after she was left clinging to a tree for over four hours during a flash flood due to heavy rains in Dahanu taluka of Palghar district on Wednesday.

Extremely heavy rains will continue to batter Mumbai and neighbouring areas until Thursday morning, the IMD said in a special bulletin.

Five labourers died and two were injured when a newly constructed wall of a factory collapsed due to heavy rains near Silvassa city in the Union Territory of Dadra and Nagar Haveli, police said. Landslides hit rail and road traffic on Goa-Karnataka borders, while low-lying villages were inundated, as incessant rains continued to pummel the coastal state for the fourth consecutive day on Wednesday. Mumbai Rains: Local Train Services on Harbour Line And Central Lines Suspended Due to Waterlogging.

Rains continued in the south Bengal districts on Wednesday with a low-pressure area formed over the Bay of Bengal. Meanwhile, low pressure has become well marked over northwest Bay of Bengal adjoining Odisha and West Bengal coasts, triggering widespread rainfall over Gangetic Bengal.

Light to moderate rainfall was recorded in North and South 24 Parganas districts, East and West Midnapore, Howrah, Hooghly, Jhargram and East Burdwan. Heavy rainfall was reported from a few isolated pockets in these districts in the past 24 hours.

Heavy rains battered many parts of Odisha. Bhubaneswar recorded 149.4 mm rainfall in 24 hours and several low-lying areas experienced water logging. The weatherman issued an orange warning for several districts till Thursday, saying heavy to very heavy rainfall is likely to occur at some places in Bargarh, Jharsuguda, Sambalpur, Deogarh, Sundargarh among others.

In Tamil Nadu, incessant rains lashing the region under the influence of active South West Monsoon claimed two lives in hilly Nilgiris District in Tamil Nadu on Wednesday and disrupted normal life. Two men, aged 52 and 43, died when roadside trees fell on them in separate incidents at Kokkal and Fingerpost areas near the district-headquarter town of Udhagamandalam.

Heavy rains have been lashing Nilgiris and parts of Coimbatore district, bordering Kerala, since the past few days, with some villages being marooned and several trees uprooted. Mumbai Rains: Netizens Share Pics and Videos of Waterlogged Streets and Flooded Lanes As Red Alert Prevails, Continuous Rainfall Cripples City’s Lifelines.

Several rural areas in Coimbatore district also witnessed moderate to heavy rains for the last 24 hours, resulting in release of surplus water into Bhavani river from Pillur Dam in Mettupalayam, about 45 km from here. Thousands of banana plantations, which were ready for harvest, fell down due to heavy winds and rains at Chadivayal in Thondamuthur on the city outskirts, dealing a blow to the growers.