Twenty persons have been arrested in connection with Kodakara black money case, in which the Bharatiya Janata Party (BJP) leaders were also quizzed by the special investigation team, Chief Minister Pinarayi Vijayan informed the Kerala Legislative Assembly on Monday. 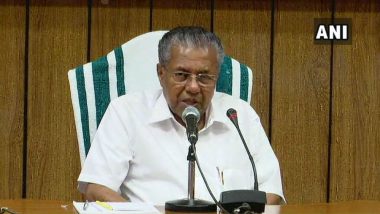 "The statements of 96 witnesses were recorded as part of the Kodakara case investigation. As many as 20 accused have been arrested and legal action has been taken. Of the Rs 3.5 crore looted, Rs 1.12 crore was used to purchase 347 grams of gold jewellery, mobile phones and watches. These items were confiscated by the police. The investigation is in full swing," he told the House in reply to a notice of adjournment moved by Congress MLA Shafi Parambil on the issue.

Giving details of the case, Vijayan said that the case was initially registered under Section 395 Indian Penal Code (IPC) based on the complaint of one Shamjeer, that Rs 25 lakh and his car was stolen by a group of people at the Thrissur Kodakara bypass on April 3.

"The complainant Shamjeer and Dharmarajan, a native of Kozhikode, who sent the money, were questioned in detail. During interrogation, it was revealed that there was Rs 3.5 crore in the stolen car. Based on this, sections 412, 212 and 120 (B) of the IPC were added in the case," he said.

Chief Minister said that subsequently, as per the order of the State Police Chief dated May 5, a special investigation team was formed under the supervision of Thrissur Range DIG and Ernakulam Crime Branch SP to investigate the case.

"Palakkad Deputy Superintendent of Police (DySP) has been appointed as the investigating officer and the probe is progressing well. The Enforcement Directorate has issued a letter from the Cochin Zonal Office requesting information related to the investigation," he said.

Kerala Chief Minister further informed that the required information has been provided by the investigating officer to the Enforcement Directorate on June 1.