Get latest articles and stories on India at LatestLY. Union Home Minister Amit Shah arrived on Saturday at the Begumpet Airport in Hyderabad to address Bharatiya Janata Party workers and people of the state. 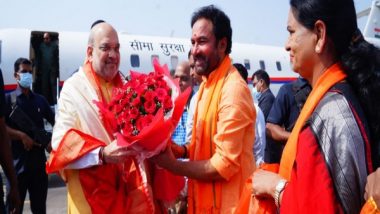 Hyderabad (Telangana) [India], May 14 (ANI): Union Home Minister Amit Shah arrived on Saturday at the Begumpet Airport in Hyderabad to address Bharatiya Janata Party workers and people of the state.

Union Minister G Kishan Reddy along with other leaders welcomed Amit Shah at the airport.

Also Read | A Cinema Hall Called the Olympia Screen Has Been Dedicated to #India on 22nd May 2022 for … – Latest Tweet by PIB India.

Shah is scheduled to address a public meeting to mark the culmination of the second leg of state BJP President Bandi Sanjay's 'Praja Sangrama Yatra'.

Further, in a tweet today, Shah wrote, "Looking forward to being in Telangana today to inaugurate the 'National Cyber Forensic Laboratory' (NCFL) in CFSL campus, Hyderabad. Will also address a public meeting in Tukkuguda."

BJP's Telangana unit announced on Monday that Shah will address the public meeting at Tukkuguda in the Rangareddy district near Hyderabad. State BJP leaders expect that the meeting will boost the morale of the party and gear up the cadre for the next year's Assembly elections.

Through the 'yatra', the BJP has been projecting the party's strength in the state. (ANI)