Get latest articles and stories on India at LatestLY. Aligarh Muslim University PhD scholar Danish Rahim on Tuesday alleged that the varsity has asked him to return his degree for "praising Prime Minister Narendra Modi in the media. 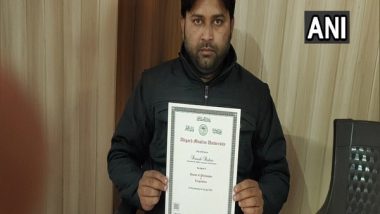 However, the university has refuted his allegation and called it "totally baseless".

Rahim has also written to PM Modi and has sought his intervention into the matter. "AMU asked me to return degree in linguistics and to get one in Language of Advertising and Marketing (LAM) course instead. It's happening to me because I praised PM Modi," he alleged.

Refuting Rahim's allegations, Aligarh Muslim University Spokesperson, Professor Shafey Kidway said, "The allegations are totally baseless. He did his Master of Arts and PhD in Language of Advertising and Marketing (LAM) course of the Department of Linguistics, which also offers a PhD degree in Linguistics."

"Since he did his MA in LAM, he should get PhD degree in LAM," he added while saying that Rahim was given the PhD degree in Linguistics "by mistake".

"The mistake will be rectified... This incident has nothing to do with politics," he added. (ANI)