Following this, members and workers of the state unit of BJP staged a protest in Kolkata. 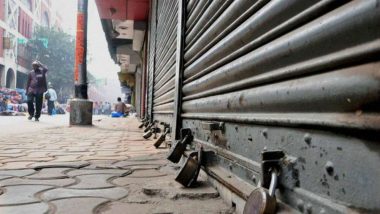 Kolkata, July 13: The West Bengal BJP leadership on Monday called for a 12-hour bandh in the districts of North Bengal on July 13 over the death of BJP MLA Debendra Nath Roy.

The Hemtabad MLA Roy's body was found hanging outside his residence in the Uttar Dinajpur district earlier in the day. Following this, members and workers of the state unit of BJP staged a protest in Kolkata. Debendra Nath Roy Death: Need Thorough Probe Into BJP MLA’s Death to Unravel Truth About Political Violence, Says West Bengal Governor Jagdeep Dhankar.

Earlier today, Superintendent of Police (SP) of Raiganj Sumit Kumar had said that three persons were named in the suicide note recovered from the pocket of the deceased MLA.

"Today morning a case was reported when the body of MLA Hemtabad Debendra Nath Roy was found hanging outside his house at Raiganj. The police team which went there, after an investigation found a suicide note in his pocket in which 3 persons have been named as responsible for his death," Kumar told ANI here.

"The family has identified the handwriting as that of the deceased MLA. We are looking into all angles and evidence. But prima facie, it seems to be a case of suicide," he added. West Bengal BJP had earlier claimed that their leader was "killed and then hung".

"Body of Shri Debendra Nath Ray, BJP MLA from Hemtabad, a reserved seat, in Uttar Dinajpur, was found hanging like this in Bindal, near his village home. People are of the clear opinion that he was first killed and then hung. His crime? He joined the BJP in 2019," BJP Bengal's tweet read.