Shinde said Shiv Sena MLAs were finding it difficult to get work done during Maha Vikas Aghadi rule and the Congress and NCP, which were its constituents were trying to gain ground. 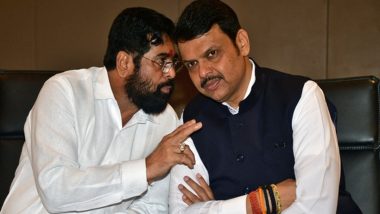 Mumbai, July 6: BJP's support to the government led by him shows that the party is not only for power but for ideology also, Chief Minister Eknath Shinde said on Wednesday and noted that the MLAs who had carried out revolt which forced Uddhav Thackeray to resign had taken a "Hindutva position".

In an exclusive interview with ANI, Shinde said Shiv Sena MLAs were finding it difficult to get work done during Maha Vikas Aghadi rule and the Congress and NCP, which were its constituents were trying to gain ground. "All were anticipating, there was perception in public that BJP does anything for power. But they have shown to the people that these 50 people have taken a Hindutva position, an ideological position and their agenda is of development and Hindutva and they should be supported. And they supported us despite having more numbers, more MLAs. They gave us support for the post of Chief Minister," Shinde said. Maharashtra CM Eknath Shinde’s Government Supported by BJP Wins Vote of Confidence.

Shinde said Prime Minister Narendra Modi told him to take the state forward, take it towards development and take forward development works. The Chief Minister said Prime Minister assured of his and Centre's full support in development endeavours. "This is a big thing. The Centre is with us. We have not done anything illegal. The pre-poll alliance was between BJP and Shiv Sena. We are allying with that party." Maharashtra CM Eknath Shinde Offers Prayers at Siddhivinayak Temple in Mumbai (Watch Video).

Asked about his remark of their alliance winning 200 seats in the next assembly polls, Shinde said 170 MLAs are with the alliance and only 30 more remain. "We can get more than 200 seats," he said. He said BJP leader Devendra Fadnavis has become Deputy Chief Minister showing "a big heart". Shinde said it was unexpected for Fadnavis but he followed BJP directions.

"It was unexpected for him, but he followed party directions. And a worker like me (of) Balasaheb and Anand Dighe, was made the chief minister, I am thankful to PM Modi, Home Minister Amit Shah and BJP chief JP Nadda. I thanked Naddaji yesterday. The perception that was there among people, that has been totally changed that BJP is not only for power but also for ideology," he said.