Uttar Pradesh: Bodies Found Buried in Sand on Banks of Ganga in Prayagraj

The discovery has caused panic among people living in nearby areas. Scores of decomposing bodies laid uncovered in the Sangam area. 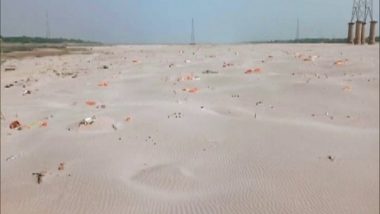 Visuals from the banks of river Ganga. (Photo/ANI)

Prayagraj, May 16: More bodies were found buried in the sand on the banks of the Ganga in Uttar Pradesh's Prayagraj district. The discovery has caused panic among people living in nearby areas. Scores of decomposing bodies laid uncovered in the Sangam area.

"For the last 2-3 months, people have been burying their dead here. Sand covering the bodies is blown away by strong winds, exposing the decomposing bodies. Predatory birds and dogs feast gather and feast on the remains. The government should make arrangements for proper burials," a local, Dina Yadav told ANI. Dead Bodies Found Buried in Sand Along Ganga River in UP's Unnao District Days After Corpses of Suspected COVID-19 Patients Spotted Floating.

Others have expressed concerns that the corpses will spread more diseases.

"The government should be more careful, especially during this pandemic, as this can spread more diseases to people and worsen the situation. People are helpless. Many are poor and do not have the resources for a proper burial. The government should see to this as well," said Sanjay Srivastava, another nearby resident.

Despite repeated attempts, district officials have refused to comment on the matter.

Locals have also voiced concerns that the sanctity of the holy river is being compromised, as devotees have stopped taking holy baths due to the foul smell that has worsened over the days.

"At least 400-500 bodies have been buried here. This is a sacred place where people used to come to take holy baths. People no longer like to come here. The government should ensure that this matter is taken care of," said Kunwar Jeet Tivar.

Similar scenes were witnessed in UP's Unnao district, after which a team of the local police carried out an inquiry to find more bodies.

In the last week, Ghazipur and Bihar's Buxar too have seen grim incidents of bloated, decomposing bodies floating in the river. Many washed up on the shores while some were pulled up by stray dogs.

While it remains unconfirmed if the bodies in Prayagaraj are of COVID-19 patients, nearby residents have said such scenes have never been witnessed before and only started with the second COVID wave.

"We have never seen such a sight near the river Ganga before. There are thousands of bodies here. The government should follow 'Swachh Bharat' and maintain cleanliness in the area," said Sanjay Srivastav.

As per the union health ministry, there are currently 1,93,815 active COVID-19 cases in Uttar Pradesh. A total of 13,85,855 patients have recovered so far and 16,957 deaths have been reported since the beginning of the pandemic.

According to the district administration, 165 fresh cases, 521 recoveries and nine deaths were reported in Prayagraj on Saturday.