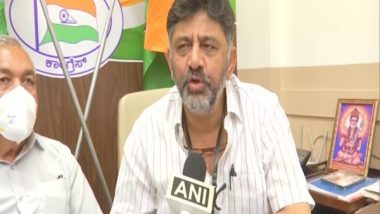 "Cheating is a common phenomenon that happens in politics. Not just DK Shivakumar or Congress, every party would have examples of such incidents. We had brought Pratap Gowda Patil from BJP itself. Hence, going to another political party and returning is common in politics," said Shivakumar while speaking to the media at his Sadashiva Nagar residence.

Stating that not only those 17 MLAs who toppled the JDS-Congress coalition government by switching over to the BJP but anybody who is willing to accept the ideology of the party is welcome to join the party, he said, "All those individuals who are willing to accept the ideology of Congress can apply to join the party. I'm not addressing just those 17 individuals here. The party will consider all applications and make a final decision in its best interest."

"Whoever respects the ideology of Congress and is willing to join the party may apply to the committee, headed by Allam Veerabhadrappa. He will see whose application is to be considered and whose not. We shall collect the opinions of our Block Congress, District Congress President, local party workers' opinions and then take final, appropriate decisions at the State level," said the Karnataka Congress president.

Each of us has different opinions. The party's decision is more important than individual opinions. No one amongst the 17 who left the party and became ministers has contacted the party so far. I'm not addressing just those 17 individuals. Anyone can apply," he added.

We will support the Government in whatever it does to save the lives of people. We will not oppose any pro-people decision taken by the government. Give vaccines, give compensation to the people. This is our demand, said Shivakumar.

"All those unorganized sector labourers, cultural job dependants, and the poor in various societies have been hit hard by Corona and have died. But the government has not given compensation to them. Even now, people are being forced to apply time and again. I don't know why the Government is committing such mistakes. I keep on reiterating that life moves on only when people are alive. Hence, compensation should be given when the people are alive. There is no point in compensating post-death. Help those who spent lakhs of hard-earned rupees in hospitals. You may do unlocking or anything, but do something which is useful to the people," Shivakumar added. (ANI)