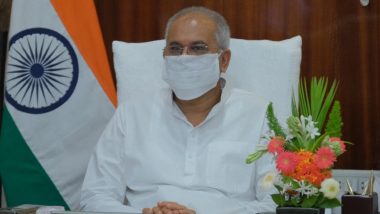 New Delhi, April 30: Chhattisgarh Chief Minister Bhupesh Baghel on Saturday attacked the BJP-led Union government, asking if there was no shortage of coal why were passenger trains cancelled. The railways has cancelled 42 passenger trains to facilitate coal movement in the wake of a power crisis in various parts of the country, causing inconvenience to people travelling to and from coal-producing states such as Chhattisgarh, Odisha, Madhya Pradesh and Jharkhand.

Baghel claimed that 23 trains from Chhattisgarh were cancelled and after talking to the railway minister six of them have been restored. "If coal is available then why are they stopping the operation of trains across the country?" he asked.

Interacting with reporters on the sidelines of a conference of chief ministers and chief justices of high courts, he claimed the Centre was importing expensive coal from abroad but was not paying revised royalty to the states at much cheaper rates of Rs 3,000 to Rs 4,000 per tonne against Rs 15,000 to Rs 20,000 per tonne from abroad. The Union government is harming the states and bringing expensive coal from abroad, he alleged, adding that if there is a shortage of coal, mining should be increased. Chhattisgarh CM Bhupesh Baghel Says ‘Centre Must Ensure Coal Availability With Power Plants’.

On why non-BJP states were not reducing VAT on petrol and diesel, as sought by the prime minister, Baghel countered, asking why was the Centre not abolishing the cess on petroleum products. He also said the petrol rates are increasing in Assam and asked why was the government increasing the price of LPG.

"Why does the government not reduce the cess? Why is the Centre not paying GST compensation to states?" he asked, adding that Chhattisgarh has Rs 30,000 crore pending from the Central government. At a press briefing of the Congress, its spokesperson Supriya Shrinate asked what the was government doing to tide over the power crisis.

She alleged the government was not doing its job as it did not make plans for power demands during the ensuing peak summer season. "What was the government's preparation for the summer season while knowing that the demand would rise," he asked, alleging that it was busy instigating people.

The Congress leader alleged that 16 states, including 12 BJP-ruled ones, are facing long power cuts of up to 10 hours. She also asked why was coal not being fully supplied to the power plants in the country for electricity production.

It is unfortunate that the government, instead of planning for the peak power demand, is blaming the states for its own failures, Shrinate said. She also asked why over 200 trains have been cancelled while alleging that this is the result of "non-planning" by the BJP government.