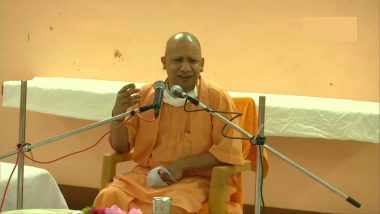 Balrampur, October 17: Facing flak over a string of rape incidents in Uttar Pradesh, Chief Minister Yogi Adityanath on Saturday launched 'Mission Shakti' campaign focusing on ensuring the safety and dignity of women and girls, with a stern warning that perpetrators of crimes against females will be dealt with an iron hand.

The chief minister said the campaign, whose start coincided with the commencement of the Navrati festival dedicated to Goddess Durga, is a tribute to the woman who died after being allegedly raped by two men in Balrampur and asserted that his government has "zero tolerance" towards crime against women and girls. Also Read | Madhya Pradesh Shocker: Man Kills Wife And Daughter in Rewa District, Chops Their Bodies Into Pieces, Arrested.

The 22-year-old Dalit woman died after being allegedly raped by two men, who were later arrested, in the district. The incident came close on the heels of the gangrape-murder of another Dalit woman in Hathras that had drawn intense outrage after alleged apathy of the administration. Also Read | Deepika Padukone, Jacqueline Fernandez’ Images Placed on Job Cards in Madhya Pradesh’s Khargone, MGNREGA ‘Fraud’ Unearthed.

"Those who cast an evil eye on the dignity and self-respect of women will find no place in the state. Perpetrators of such crimes are a blot on the society and the government will deal with them with an iron hand," Adityanath asserted .

The campaign will continue for the next six months till Basant Navratri, the chief minister said. "The first phase of 'Mission Shakti' will focus on spreading awareness towards ensuring the safety and dignity of women and girl-child.

"In the second phase, 'Operation Shakti' will target eve-teasers and put them on the path of punishment or reform. If such elements do not mend their ways, they will have to face social-boycott and their pictures will be displayed publicly," Adityanath said.

The chief minister said that this year Ram Lila and Durga Puja pandals will also spread the message of 'Mission Shakti', which will have the involvement of 24 departments. Various events are lined up during the campaign for which 100 role models among women will be identified in each district to help spread the message of women safety, self-respect and self-reliance.

Adityanath described women as a symbol of 'Shakti' and said gender equality and protection of the girl child should start from home itself. "Women are venerable in our eternal tradition and Navratri signifies this. In these changing times, the new generation should become the carrier of our eternal tradition, which always professes the cause of women as the prime duty of mankind.

'Mission Shakti' is a reminder of our duty towards women and girls," he said. Terming female foeticide as a curse, the chief minister said, "Protection of the girl child and giving respect to women should start from home". Adityanath also expressed his strong views against child marriage, saying such practices should be publicly condemned.