Congress said on Tuesday that the seizure of 3,000 kg heroin from Gujarat's Mundra port is a "serious issue" for India and added that it is a "conspiracy" to throw the youth into drug addiction. 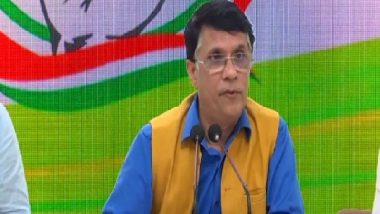 New Delhi [India], September 21 (ANI): Congress said on Tuesday that the seizure of 3,000 kg heroin from Gujarat's Mundra port is a "serious issue" for India and added that it is a "conspiracy" to throw the youth into drug addiction.

"The drugs sent from Afghanistan to India via Iran port were found on Mundra port of Gujarat. It is a serious issue for India when you have a look at its price and amount. It is a conspiracy to throw our youth into drug addiction. The money made through the sales of these drugs in India is used to fuel terrorism against our nation. This issue is serious and raises a lot of questions," said Congress national spokesperson Pawan Khera while addressing a press conference.

Also Read | R-Value For COVID-19 In India Drops Below 1 In Mid-September.

Questioning the centre, he asked that why it had not appointed the Director-General of Narcotics Control Bureau (NCB) for the last 18 months.

Speaking further, he said, "Why since the last few years, Gujarat has become the preferred route for drug traffickers? The drug traffickers are operating with ease under the nose of the government. The drugs were ordered by a party in Vijayawada, Andhra Pradesh. Why did they think it was easy to get drugs from Mundra Port, which is a private port owned by the Adani Group? I do not see any debates in media either. Otherwise, whenever drugs were caught within the film industry, all major issues of the country were sidelined and the entire film industry was slandered."

The Directorate of Revenue Intelligence (DRI) seized over 3,000 Kg heroin and arrested two persons from Mundra Port in Gujarat on Monday.

The investigation conducted so far has also revealed the involvement of Afghan Nationals, who are under investigation. (ANI)