In view of the difficulties faced by states in managing the funding, procurement and logistics of COVID-19 vaccines, the Centre on Tuesday released the revised guidelines for the national COVID vaccination programme, under which the Government of India will procure 75 per cent of the vaccines being produced by the manufacturers in the country. 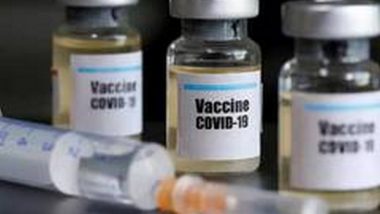 New Delhi, June 8: In view of the difficulties faced by states in managing the funding, procurement and logistics of COVID-19 vaccines, the Centre on Tuesday released the revised guidelines for the national COVID vaccination programme, under which the Government of India will procure 75 per cent of the vaccines being produced by the manufacturers in the country.

According to the notification issued by the Centre, the revised guidelines will be implemented from June 21 and "will be reviewed from time to time". COVID-19 Vaccine Supply Will Be Increasing in Coming Days, Says PM Narendra Modi During Address To Nation.

"The government of India will procure 75 per cent of the vaccines being produced by the manufacturers in the country. The vaccines procured will continue to be provided free of cost to States/UTs as has been the case from the commencement of the National Vaccination Programme. These doses will be administered by the States/UTs free of cost to all citizens as per priority through Government Vaccination Centres," the notification said.

Prime Minister Narendra Modi had on Monday announced a centralised procurement system for Covid-19 vaccines, beginning from June 21, with 25 per cent of the procurement being made available for the private sector, as well as free vaccinations for everyone above the age of 18.

He had also announced a cap of Rs 150 on the amount private hospitals can charge over the cost of the purchase of the vaccine from the manufacturer. In respect of the vaccine doses provided free of cost by the Government of India to the States, the Centre said that the vaccination will be prioritised as the following--Health Care Workers; Front Line Workers; Citizens more than 45 years of age; Citizens whose second dose has become due; and Citizens 18 years and above.

As per the guidelines, within the population group of citizens over 18 years of age, the Centre said States/UTs may decide their own prioritisation factoring in the vaccine supply schedule.

"Vaccine doses provided free of cost by Government of India will be allocated to States/UTs based on criteria such as population, disease burden and the progress of vaccination. Wastage of vaccine will affect the allocation negatively," the notification said.

Further, the Centre said that under the revised guidelines, it will provide States/UTs advance information of vaccine doses to be supplied to them. "States/UTs should similarly, further allocate doses well in advance to districts and vaccination centers. They should also put in the public domain the information about the above availability at district and vaccination center level, and widely disseminate it among the local population, maximizing the visibility and convenience of citizens," it stated.

According to new guidelines, the price of vaccine doses for private hospitals would be declared by each vaccine manufacturer, and any subsequent changes would be notified in advance. "The private hospitals may charge up to a maximum of Rupees 150 per dose as service charges. State Governments may monitor the price being so charged," it stated.

The government noted that all citizens irrespective of their income status are entitled to free vaccination, and those who have the ability to pay are encouraged to use private hospital's vaccination centres.

"The CoWIN platform provides every citizen the facility of conveniently and safely pre-booking vaccination appointments. All government and private vaccination centers would also provide onsite registration facility, available both for individuals as well as groups of individuals, for which detailed procedure is to be finalized and published by States/UTs, in order to minimize any inconvenience to citizens," the Centre said adding that the states may also optimally utilize the Common Service Centres and Call Centres to facilitate prior booking by citizens.

The plan for centralised free COVID-19 vaccination was presented to Prime Minister Narendra Modi on June 1 on the completion of one month of the decentralised model. The implementation of the Liberalised and accelerated phase-3 strategy of Covid-19 vaccination has started from May 1, 2021.