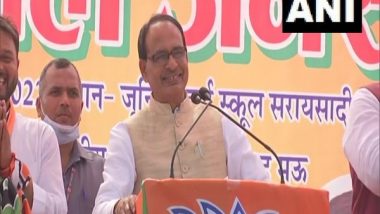 Addressing an election rally in Uttar Pradesh's Mau amid the ongoing Assembly elections, Chouhan said, "Socialism of Samajwadi Party used to spread riots. Akhilesh Yadav is 'Dangesh' and there were criminals everywhere in his government. Since the time Baba (Yogi Adityanath) has come, they're in jails. They flourished during Akhilesh's tenure but are trembling now." Uttar Pradesh Assembly Elections 2022: Aparna Yadav Claims BJP Tsunami in UP, Says ‘Yogi Adityanath Govt To Return to Power With Thumping Majority’.

Urging the people to vote for BJP in the sixth phase of the seven-phased Assembly elections, the MP Chief Minister said, "After lots of efforts, Uttar Pradesh has come on track. I would like to request you (public) to not make any mistake, if Samajwadi Party people come to power they'll again become rioters."

Terming Prime Minister Narendra Modi as "saviour", Chouhan highlighted the works of the government during the COVID-19 period and said that during that time, people were stuck abroad and the Prime Minister brought them back under 'Vande Bharat' mission.

"Narendra Modi is the saviour of people. During Covid when people were stuck abroad PM Modi brought them back under Vande Bharat mission. It was due to Narendra Modi that vaccines were made," he said.