Get latest articles and stories on India at LatestLY. The death toll in a massive fire that broke out in a building near Delhi's Mundka metro station today rose to 26. 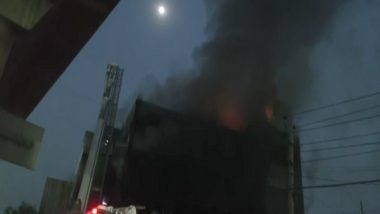 New Delhi [India], May 13 (ANI): The death toll in a massive fire that broke out in a building near Delhi's Mundka metro station today rose to 26.

According to the Deputy Commissioner of Police (Outer District) Sameer Sharma, 50 people were rescued so far and the rescue operation is underway.

Also Read | “The Incident of Fire in Delhi’s Mundka is Very Sad. I Am in Constant Touch with the … – Latest Tweet by ANI.

"As many as 26 bodies recovered in the fire at the three-storey commercial building which broke out this evening near Delhi's Mundka metro station," Sunil Choudhary, Deputy Chief Fire Officer, Delhi Fire Service told media persons.

The fire broke on the 1st floor of the building which is an office of a CCTV cameras and router manufacturing company. The owner of the company is in police custody.

"Efforts are being made to control the situation," the police said.