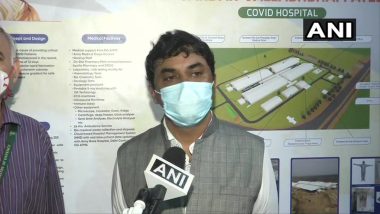 "It is a great day for Indian aeronautical scientific community and industry. Getting approval for the order of the largest quantity of aircraft ever is a big achievement and is the culmination of hard work of three decades," said DRDO chief on CCS approval for 83 LCA aircraft. BrahMos Missile Ready for Exports, Many Countries Interested, Says DRDO Chief Satheesh Reddy.

While thanking Prime Minister Narendra Modi, Reddy said, "It (procurement deal) paves way for the development of various advanced aircraft systems in the country. I want to thank the Prime Minister for giving the approval to this important project."

The deal to be signed in the next few days with HAL would strengthen the Indian Air Force's fleet of homegrown fighter jet 'LCA-Tejas' and overall combat capability.

"The CCS chaired by the Prime Minister Narendra Modi today approved the largest indigenous defence procurement deal worth about Rs 48000 crores to strengthen IAF's fleet of homegrown fighter jet 'LCA-Tejas'. This deal will be a game-changer for self-reliance in the Indian defence manufacturing," Defence Minister Rajnath Singh tweeted.

The deal would be a major boost for the IAF and help it to arrest the fall in the number of its fighter aircraft squadrons. Light Combat Aircraft Mk-1A variant is an indigenously designed, developed and manufactured state-of-the-art modern 4+ generation fighter aircraft.

It is the first "Buy (Indian-Indigenously Designed, Developed and Manufactured)" category procurement of combat aircraft with an indigenous content of 50 per cent which will progressively reach 60 per cent by the end of the programme.

The Cabinet has also approved infrastructure development by IAF under the project to enable it to handle repairs or servicing at their base depot so that the turnaround time would get reduced for mission-critical systems and would lead to the increased availability of aircraft for operational exploitation.