State disaster management director Sudesh Kumar Mokhta said that one person was killed and nine went missing in flash floods triggered by a cloudburst in the tribal district of Lahaul-Spiti while another man was reported missing from the Chamba district. 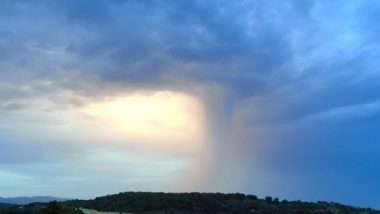 Shimla, July 28: At least one person was killed while 10 have gone missing as flash floods triggered by incessant rains lashed Himachal Pradesh, a senior disaster management official said on Wednesday. State disaster management director Sudesh Kumar Mokhta said that one person was killed and nine went missing in flash floods triggered by a cloudburst in the tribal district of Lahaul-Spiti while another man was reported missing from the Chamba district.

In Lahaul-Spiti, the incident took place at Udaipur in Lahaul at around 8 PM on Tuesday, he said. Two tents of labourers and a private JCB have been washed away, he said, adding that a 19-year-old labourer, Mohammad Altaaf of Jammu and Kashmir, was injured and rushed to a nearby hospital. Cloudburst Reported in Gulabgarh Area of Kishtwar District of Jammu and Kashmir, No Casualties So Far.

In Chamba, a JCB helper has been washed away in the flash floods triggered by heavy rains in Chaned tehsil on the Chamba-Pathankot road, he said. A search operation is being carried out by the police and fire brigade teams. Several roads have been blocked and around 60 vehicles stuck as multiple landslides and flash floods occurred in various parts of Lahaul-Spiti, Mokhta said.

A landslide near Kirting village on state highway number 26 (SKTT) in Lahaul has led to a road blockade. A JCB has been sent for its restoration, he said. Meanwhile, heavy rains continue to lash various parts of the state with the Shimla meteorological centre issuing a red weather warning.

Earlier on Tuesday, several people were evacuated from Lahaul-Spiti's Darcha village after the water level rose in the Bhaga river following a heavy spell of rain, Mokhta said. According to the Darcha police check-post, the water level in the river increased considerably due to the heavy rainfall, damaging three shops near the river bank. People living near low-lying areas have been safely evacuated by the police, the official added.