Sharma, the Lok Sabha MP from Gautam Buddh Nagar adjoining Delhi in western Uttar Pradesh, also said that checking fuel prices is not in the control of any government or minister now. 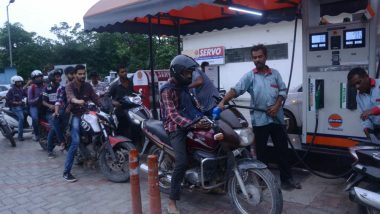 Noida, July 1: BJP MP and former Union minister Mahesh Sharma on Thursday said the rise in fuel prices in the country is due to policies of the previous Congress-led central government. Sharma, the Lok Sabha MP from Gautam Buddh Nagar adjoining Delhi in western Uttar Pradesh, also said that checking fuel prices is not in the control of any government or minister now. Fuel Price Hike: Rahul Gandhi Slams Modi Government Over Rising Prices of Petrol and Diesel.

“If you look at the rate of price rise in petrol and diesel, you know it is not because of our government but of the Congress. The Congress during its rule had linked the fuel prices to the international price index, which is now not in control of any government or minister,” he said.

“The fuel prices are rising because of a system that was created by the Congress,” he told reporters at a press meet when asked if inflation could be an issue for the BJP in future elections.

The former Union minister also said the government is taking adequate steps and considering if petrol and diesel should also be brought under the GST regime of taxation.

“The government is seized of the issue. Whenever state governments would want, the issue would be taken up for discussion,” he said.

“As far as inflation in other sectors is concerned, I believe both the Centre and the UP government have taken right decisions at the right time to tide through the situation especially during the pandemic,” he added.

Sharma's remarks come in the wake of Congress accusing the Centre of collecting crores of rupees through excise duty and taxes on petrol and diesel due to which fuel prices are hovering around or have crossed Rs 100 per litre at several places in the country.