India News | Haj Committees, Waqf Board, Others to Be Roped in to Remove COVID Vaccination Hesitancy: Mukhtar Abbas Naqvi

To clear hesitancy and misconception against COVID vaccination, social and educational organisations like Haj committees, Waqf board, Central Waqf Council and self-help groups would be roped in the "Jaan Hai To Jahaan Hai" campaign, said Union Minister for Minority Affairs Mukhtar Abbas Naqvi on Thursday. 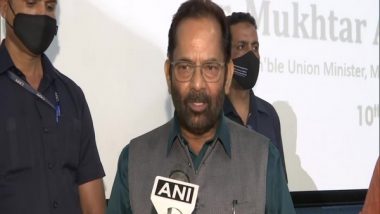 "A group of clerics and NGO joined hands to convince people for vaccination. To counter rumours regarding vaccination, social and educational organisations like Haj committees, Waqf board, Central Waqf Council and self-help groups will be roped in for 'Jaan Hai To Jahaan Hai' campaign," Naqvi told ANI.

Meanwhile, a Mumbai-based NGO and Muslim clerics have joined hands to run an awareness campaign for the slum dwellers in the city.

The NGO 'Bhamla Foundation' brought maulanas and maulvis from various Masjid committees in Mumbai together and urged to them carry out the awareness campaign in the slum areas.

The group not only make awareness but also make arrangements to book slots for vaccination for the people. The group even set up a war room to make all the arrangements for their campaign.

Speaking to ANI, Asif Bhamla, the Chairman of Bhamla Foundation said, "The initiative will instil trust against COVID vaccination among Muslim community. Many people hesitate to go for vaccination due to some misconceptions. So we roped in maulanas and maulvis who can convince people and clear the hesitancy among Muslims.

Moulana Tabrez, one of the cleric participated in the campaign said there were various misconception among the people for the COVID vaccine. "Some say that they will die after taking it while others are anxious about side effects. To clear this misinformation, we are going door to door in two different shift to make awareness for vaccination. Many people have agreed to vaccinate themselves after our awareness campaign," added Tabrez.