The rainfall activity in Madhya Pradesh is expected to go up due to a trough that runs from the central part of the state to south Tamil Nadu, the IMD said. 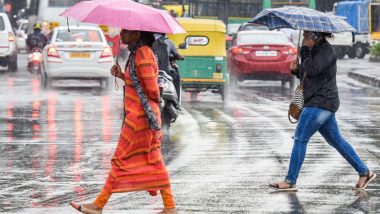 Bhopal, July 18: The India Meteorological Department (IMD) on Sunday issued a yellow alert for Madhya Pradesh as per which isolated places in 11 districts, including Rewa and Damoh, are likely to receive heavy rainfall.

It also issued another yellow alert, predicting thunderstorm with lightning in Bhopal, Indore, Gwalior, Jabalpur and five other divisions in the state. Both these alerts are valid till Monday morning, an official said.

Yellow alert means authorities are advised to be updated on the situation. The rainfall activity in Madhya Pradesh is expected to go up due to a trough that runs from the central part of the state to south Tamil Nadu, the IMD said. Monsoon 2021 Forecast: Heavy Rainfall to Lash Maharashtra and Goa Till July 19, Rainfall Activity Gains Momentum in North India.

"This is going to increase the rainfall activities in MP," he said. Narvar area in Shivpuri district of west MP received the highest rainfall of 142 mm in the 24 hours that ended 8.30 am Sunday. Likewise, Badwara in Katni district of east MP recorded 35 mm rainfall in the same period, he added.

Since over the last fortnight, people in large parts of Madhya Pradesh, including the state capital of Bhopal, have been witnessing humid and sticky weather with maximum temperature shooting up to 40 degrees Celsius in some districts. "But a good spell of rain is likely to turn the weather pleasant across MP," Saha said.