Weather Forecast: IMD Predicts Thunderstorm, Rain in Delhi, Haryana, UP in Next 2 Hours

The India Meteorological Department (IMD) on Saturday predicted a thunderstorm with light to moderate intensity rain with a wind speed of 20-40 kmph at many places over Delhi, Haryana and Uttar Pradesh. 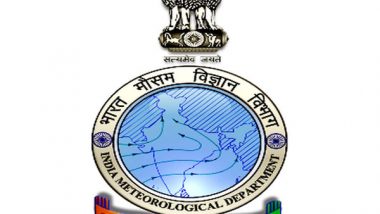 New Delhi, May 15: The India Meteorological Department (IMD) on Saturday predicted a thunderstorm with light to moderate intensity rain with a wind speed of 20-40 kmph at many places over Delhi, Haryana and Uttar Pradesh.

Earlier in the morning, IMD also predicted light to moderate intensity rains over Haryana, Rajasthan and its adjoining areas in the next two hours. Cyclone Tauktae Live Tracker Map on Windy: Cyclonic Storm Likely to Hit Coasts of Gujarat, Maharashtra and Kerala in Next 4 Days, Check Realtime Status Here.

India Meteorological Department (IMD) has been issuing operational forecasts for the date of monsoon onset over Kerala from 2005 onwards. An indigenously developed state-of-the-art statistical model with a model error of +- 4 days is used for this purpose.

The 6 Predictors used in the models are; i) Minimum Temperatures over North-west India, ii) Pre-monsoon rainfall peak over south Peninsula, iii) Outgoing Longwave Radiation (OLR) over south China Sea, (iv) Lower tropospheric zonal wind over the southeast Indian Ocean, (v) upper tropospheric zonal wind over the east equatorial Indian Ocean, and (vi) Outgoing Longwave Radiation (OLR) over the southwest Pacific region.In the Indian monsoon region, initial monsoon rains are experienced over south Andaman Sea and the monsoon winds then advance in north-westwards across the Bay of Bengal. As per the new normal dates of monsoon onset/progress, the southwest monsoon advances over the Andaman Sea around May 22.

As a result, the cross-equatorial south westerlies have temporarily strengthened over the Arabian Sea. The cross-equatorial flow is very likely to strengthen and deepen over the Bay of Bengal from 20th May and a sustained rainfall activity is likely over the South Bay of Bengal and Andaman and Nicobar Islands from 21st May. Hence the monsoon advance over Andaman and Nicobar Islands is very likely around May 21, 2021.