In a press conference, Kejriwal said that all preparations had been made for the scheme. 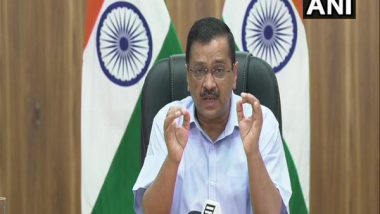 New Delhi, June 6: Delhi Chief Minister Arvind Kejriwal on Sunday slammed the Central government for putting a stop to the government's doorstep ration delivery scheme that was scheduled to start on Monday, asking why, despite writing to the Centre five times, the scheme had been brought to a halt. In a press conference, Kejriwal said that all preparations had been made for the scheme.

"Just two days before the 'Doorstep Delivery of Ration' scheme's implementation, the Central government stopped it. If this ghar-ghar ration scheme was implemented, the ration mafia would be stopped. The strings of this ration mafia reach right to the top. This is the first time a government has had courage to stand up to the ration mafia," he said. Delhi Govt Decides to Implement Doorstep Ration Delivery Scheme Without Name After Centre Stopped MMGGRY Scheme.

He added, "Even if legally, we don't need the Centre's permission to implement this scheme, and even if the Delhi government is fully capable of executing this, we got your approval not just once, but five times."

With regard to Central officers saying that the scheme was halted as the ration that would be distributed belonged to the Centre, Kejriwal said that he would credit the scheme to the Prime Minister.

"The Centre's officers are saying that the Centre is objecting to this scheme as the ration is the Centre's. They are asking why the Delhi government should get credit. Sir, this is not for credit. My aim is to give the poor their ration. All credit will go to you. I will tell people that you have started it. The ration belongs to the people and it is our responsibility to stop its theft," he said.

He further said that several of the Centre's objections had been already been addressed in March, including the name of the scheme. The scheme was originally named the MMGGRY (Mukhya Mantri Ghar Ghar Ration Yojana) but a notification on March 9 was issued by the Union Ministry of Consumer Affairs that the subsidised foodgrains being allocated by the department for distribution under the National Food Security Act (NFSA) cannot be used for running any state-specific or other scheme under a different name other than NFSA.

Following this, the Delhi government dropped the name. "We agreed to your objections and removed the name. Despite all this, you are saying that we did not get approval. How else does one take approval? If pizza, burgers, smartphones and clothes can be delivered at home, why not ration to the homes of the poor?" he asked.

The Chief Minister also mentioned that case that was filed in the Delhi High Court over the scheme by ration shopkeepers and asked by, despite the court denying a stay on the scheme, had the Centre stalled it.

"The Centre said that this scheme is being halted because ration shopkeepers have filed a case in the Delhi High Court against it. How can you scrap the scheme for this purpose? Ration shopkeepers had gone to the HC for a stay. The HC denied. When the HC did not grant a stay, how could you? Why do you have so much sympathy for the ration people?" he asked.

He added, "I request you (PM Modi) with folded hands on behalf of Delhi's 70 lakh poor people, please don't stop this scheme (Doorstep Delivery of Ration). It is in the interest of the nation. There should be no politics over matters meant for the country's benefit."