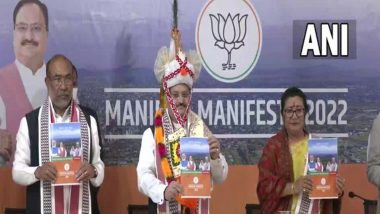 Imphal, February 17: Bharatiya Janata Party chief J P Nadda on Thursday released the party's election manifesto for Manipur, promising preservation of the rights of the indigenous people, two extra LPG cylinders, and free electric scooty to college going girls. The manifesto, with the focus on youth and farmers, was unveiled ahead of the Manipur Assembly elections slated to be held in two phases.

Addressing the media after the release of the manifesto, Nadda said, "I have come here with a report card. This shows the culture of the BJP and the form of our good governance. None of the political parties dares to show the report card. We have talked about the empowering of women, youth, and farmers in the manifesto. When we talk about farmers, youth, and women, the area of focus will be infrastructure, health, and education." Elaborating on the highlights of the manifesto, the BJP national president said that two extra free LPG cylinders will be given to the beneficiaries of the Pradhan Mantri Ujjwala Yojana.

"There are many highlights of the manifesto. Firstly, we're promising the preservation of the rights of the indigenous people and commitment to territorial integrity. We also commit that we will be providing two extra free LPG cylinders to Pradhan Mantri Ujjwala Yojana beneficiaries. If I talk about education, we are going to provide free scooty to all meritorious college-going girls of the state. Girls from the economically weaker sections will be given incentives of Rs 25,000 each for education. We will distribute free laptops to all meritorious students passing class 12th and support them for higher education," he said. Manipur Assembly Elections 2022: From CM N Biren Singh To Ratankumar Singh, Here Are Five Key Candidates Contesting In Phase 1 Of State Polls.

He also said that scholarships will be given to all children of small and marginal farmers. "This is empowering the farmers as well as the youth. We stand committed for the skill university to be established in Manipur. That is how we will provide jobs. We stand by to open an AIIMS in Manipur," Nadda added.