Bahujan Samaj Party (BSP) chief Mayawati on Thursday slammed the Uttar Pradesh government over the law and order situation in the backdrop of the murder of a labourer and his family in Prayagraj. 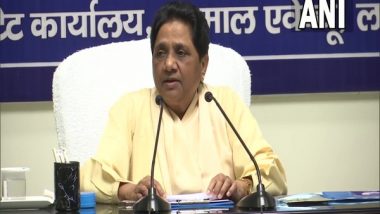 Prayagraj. November 27: Bahujan Samaj Party (BSP) chief Mayawati on Thursday slammed the Uttar Pradesh government over the law and order situation following the murder of a labourer and his family in Prayagraj.

"Murder of four members of a Dalit family by miscreants in Prayagraj is very sad shameful. This incident also shows the poor handling of law and order by this government. It seems that the BJP is also following in the footsteps of the SP government in this regard," Mayawati tweeted in Hindi.

"A BSP delegation led by Babulal Bhanwra who visited after the incident has said that there is a tremendous terror of miscreants in Prayagraj, due to which this incident has also happened. BSP demands that strict action is taken against the guilty," she added.

Phoolchand Pasi, a labourer, his wife, son and daughter were murdered in Gohri village of Soraon Vidhan Sabha of Prayagraj. Local gangsters had threatened Phoolchand's family a few days ago.

"Deceased Phoolchand (45), wife Meenu (40), daughter Sapna (17) and son Shiv (10) belonging from one family were found dead here. The deceased family had filed an SC/ST case against some people of the village itself. This controversy escalated," said Sarvashresth Tripathi, Deputy Inspector General of Police, Prayagraj on Thursday.