Maharashtra Minister Aaditya Thackeray on Monday night visited Mumbai's Kurla where a four-storey building collapsed and said that such property should be vacated on the notice of Brihanmumbai Municipal Corporation (BMC). 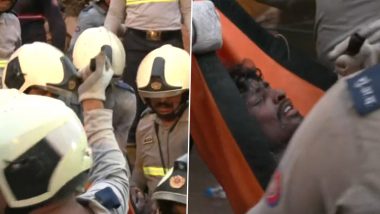 Kurla, June 28: Twelve persons have been rescued while one has died in the building collapse incident in Maharashtra's Kurla, according to the BMC. Brihanmumbai Municipal Corporation (BMC) Additional Commissioner Ashwini Bhide on Tuesday said, "D wing of the Naik Nagar Society collapsed last night. 12 people were rescued and one was declared dead. Some people are still trapped."

According to Bhide, the collapsed building was dilapidated, and since 2013 notices were first given for repair and then to demolish the building.

A four-storeyed building collapsed in Mumbai's Kurla late on Monday night. The incident took place in the Naik Nagar area.

A fire brigade team and police are present at the spot as a rescue operation is underway. The fire brigade received a call at 11.52 pm on Monday. According to officials, 12 fire engines, two rescue vans, and six ambulances were deployed to take stock of the situation. Besides this, there are five JCBs with 28 labours.

Maharashtra Minister Aaditya Thackeray on Monday night visited Mumbai's Kurla where a four-storey building collapsed and said that such property should be vacated on the notice of Brihanmumbai Municipal Corporation (BMC).

"Whenever BMC issues notices, (buildings) should be vacated themselves...otherwise, such incidents happen, which is unfortunate...It's now important to take action on this," Thackeray told ANI.

He had added, "Around five to seven people were rescued. All 4 buildings were issued notices, but people continue to live there. Our priority is to rescue everyone...In the morning we'll look into evacuation and demolition of these buildings so that nearby people aren't troubled."