Get latest articles and stories on India at LatestLY. The ongoing search operation that began on Friday night after a four-story building caught fire in Delhi's Mundka is likely to be completed in the next 3 to 4 hours, said an official from the National Disaster Response Force on Saturday morning. 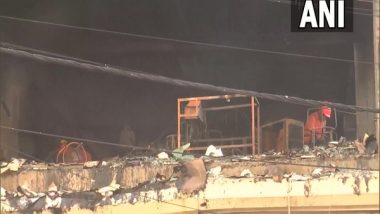 Visual from the spot on Saturday morning (Photo:ANI)

New Delhi [India], May 14 (ANI): The ongoing search operation that began on Friday night after a four-story building caught fire in Delhi's Mundka is likely to be completed in the next 3 to 4 hours, said an official from the National Disaster Response Force on Saturday morning.

Several people are still reported to be missing.

As the search operation continues, people are waiting for some information about their loved ones.

"I am looking for my sister. I can't find her," said Ismail, a man who was present at the site this morning.

Aiming to give "correct information" to such people whose family members are missing or injured and admitted to the hospital, a help desk was set up at Sanjay Gandhi Memorial Hospital.

"We've received 28 missing person complaints. We're collecting complainants' details and their relations with the missing persons. We've put up a helpline number. They'll be informed as soon as we get any information," said Sunil Kumar, Civil Defence at the hospital.

Vijay, who was present at the hospital, said that his wife is missing and he is unable to contact her since last evening.

"My wife is missing. She worked as a sales manager there. I last spoke to her at 4.10 pm last evening. I called her again, the phone is ringing but nobody is receiving the call," he said.

According to the notice by the District Magistrate (West) office, the people can ascertain about the missing persons or inform the desk about such persons on the helpline number 011-25195529, 011-25100093.

Meanwhile, the Delhi police registered an FIR and detained the company owners who were identified as Harish Goel and Varun Goel. The owner of the building who has been identified as Manish Lakra is still absconding.

A massive fire had broken out on Friday evening that left 27 people dead and 12 injured in the tragic incident.

However, the blaze was brought under control, informed the fire officials.

A total of 50 people have been rescued so far, according to the Deputy Commissioner of Police (Outer District) Sameer Sharma.

"A total of 27 people have died and 12 got injured in the fire incident," said DCP Sharma. (ANI)