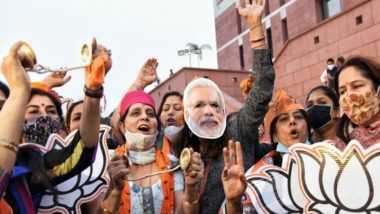 The Election Commission of India (ECI) announced results of Bihar Assembly polls in the early hours on Wednesday with the BJP winning in 74 of the 110 seats it contested and JD(U) bagged 43 seats out of the 115 seats it fought. Bihar Election Results 2020: PM Narendra Modi Thanks Voters For Another NDA Term, Amit Shah Says 'Politics of Casteism, Appeasement Defeated'.

Among the NDA allies, four seats went into the accounts of the Vikassheel Insaan Party (VIP) and 4 to former chief minister Jitan Ram Manjhi's Hindustani Awam Morcha (Secular). The NDA won an absolute majority in Bihar winning 125 seats, three more than the halfway mark needed for a victory.

The opposition Mahagathbandhan, which began the day with a lead had to take a backseat by the end of counting settling for 110 seats in the election that saw counting continue stretching over 20 hours and wrapping up only in the early hours on Wednesday.

While the BJP put up a spectacular win, the show by RJD was also spectacular. Led by Tejashwi Yadav, the RJD scored a win all the 75 seats it contested to emerge as the single largest party in the 243-member Bihar legislative assembly.

The Congress could win only 19 of 70 seats it contested and impacted the Mahagathbandhan tally.

Other Mahagathbandhan allies CPI and CPI-M won two seats each while CPI(M-L) secured a win in 12 constituencies- leading to a total of win of 16 seats by the Left parties which contested in a total of 29 seats.

The AIMIM of Asaduddin Owaisi claimed five seats of the 14 seats it was in fray. AIMIM along with its allies the BSP and RLSP together contested 20 seats. The BSP managed to win one seat in Bihar.

Chirag Paswan's Lok Janshakti Party (LJP), which had pulled out of the NDA and contested nearly 150 seats also managed to win just one. The first mass election in the country amidst conditions created by COVID-19 has paved the way for the return of Chief Minister Kumar for the fourth successive term in office.

Counting of votes, which began at 8 am at 55 counting centres across 38 districts of the state finally ended at around 4:05 am on Wednesday.

The counting process was slow as there were 1,06,515 polling stations this time compared to 72,723 in 2015 polls as part of preventive measures against COVID-19.

A delegation of RJD and Congress went to the Election Commission office in Patna and alleged "tampering" in the counting of votes in some constituencies. After leaving the ECI office, RJD leader Manoj Jha who was part of the delegation said that tampering had been done on over a dozen seats in an effort to change "people's mandate" and added that EC has assured the delegation it will "try to address their grievances".

"There are over dozens of seats where tampering has been done. They are trying to change the people's mandate. Even after all such ill-intended attempts, we will form the government. EC has assured us that they will try to address all our grievances. We trust the EC but not the district administration," Jha told reporters.

Umesh Sinha, Secretary-General, ECI said that the Election Commission has never worked under anybody's pressure. "All officials and machinery are working sincerely for declaration of Bihar election results," he said.

With indication of an NDA victory in sight, Prime Minister Narendra Modi took to Twitter to thank the people of Bihar whom he said clearly stated development as their priority.

"The poor in villages, farmers, labourers, merchants, shopkeepers and every section of Bihar have relied on the NDA's mantra of sabka saath, sabka vikas, sabka vishwas. I again assure every citizen of Bihar that for the balanced development of every person, every region, we will continue to work with full dedication," he tweeted in Hindi.

"Every voter in Bihar has clearly stated that he or she is an aspirant and priority is only and only development. The blessings of the NDA's good governance again after 15 years in Bihar shows what Bihar's dreams are, what Bihar's expectations are," PM Modi said.