India News | Not Everybody Can Afford to Work from Home, Say Daily Wagers Waiting for Assignments in Noida Amid COVID Restrictions

Get latest articles and stories on India at LatestLY. The growing number of COVID-19 cases in Delhi-NCR has led to desperation and uncertainty among migrant workers, who are facing multiple hardships due to COVID restrictions in place. 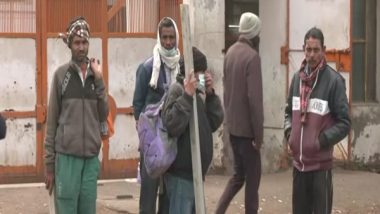 New Delhi [India], January 16 (ANI): The growing number of COVID-19 cases in Delhi-NCR has led to desperation and uncertainty among migrant workers, who are facing multiple hardships due to COVID restrictions in place.

Vishal Kumar, a daily wage labourer, said that he was unable to find a job even after sitting at Labour Chowk in Khoda for four consecutive days.

"In this hard time, employers are exploiting us by offering just Rs 200 for a job for which they used to offer Rs 500 per day. I used to send Rs 2,000 per month to my parents, but it seems impossible this month," Kumar said.

He added that he was temporarily employed as a housekeeping staff at an office in East Delhi, but after work from home was announced for all private firms, he was also asked to stop coming to office.

"Not everyone can afford work from home. I have to feed my family and for that, I have to go out on the roads in search of a job," Kumar said.

Another labourer, Santosh, said that they have been facing a hard time for around four months. "Earlier, there were restrictions on construction work due to pollution and now restrictions were imposed due to COVID-19," he said.

Notably, construction work was put on halt after Supreme Court had pulled up Delhi government to check pollution.

"I have postponed the marriage of my daughter that was scheduled next month because all my savings have been spent on rent, school fees and daily expenditure. I have been jobless for around four months. I begin my day with a hope that things will improve but it never happens," he said.

Labourers said that the lockdown in 2020 still haunts them but at that time the government and individuals had supported them. Landlords had exempted or charged minimum rent from them.

"This time my landlord has asked me to deposit the rent in two days or vacate the room. We are getting no help from anyone. We come to Labour Chowk with a hope to earn but leave empty handed by 2 pm. I do not have money to recharge my phone this month," said Ram Singh, a labourer.

Daily wagers have complained that despite having labour cards given to them by the government, they do not have any facility to avail them and nothing has changed for them.

"I got myself registered on the portal for a labour card. But it does not get me a job or any other facility that could help me in this hard time to sustain. I came to Delhi around six months ago and planned to bring my family but going through the present phase, I am considering going back," said Pramod, a labourer waiting for work at Labour Chowk in Harola in Noida. (ANI)