Get latest articles and stories on India at LatestLY. Samir Kumar, head of Prasar Bharati News Services claimed that PBNS has fulfilled the people's aspirations during its journey of 1000 days. 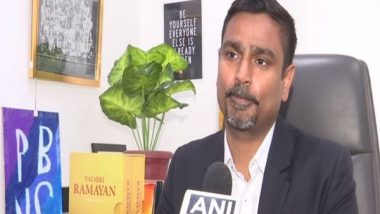 New Delhi [India], May 13 (ANI): Samir Kumar, head of Prasar Bharati News Services claimed that PBNS has fulfilled the people's aspirations during its journey of 1000 days.

Speaking to ANI on the occasion of the third anniversary of Prasar Bharati News Services, Kumar said that it is a great occasion that this small team has come a long way.

"It is said in the startup world that moment you cross 1000 days of your existence, you have made your presence felt. So as a startup in the government setup, we are completing three years and as well as one year of our daily magazine. I would say that the Prasar Bharati Board, which gave this mandate in 2019, I believe that we have fulfilled those aspirations and we have paved the way for a much brighter future for the digital wing of Prasar Bharati."

Emphasising on accurate and speedy news broadcast, Kumar said, "We are lucky that Akashavani and Doordarshan Samachar, they are one of the most authentic brands in the country. So building onto the already existing strength of authenticity of Prasar Bharati, bringing in that speed, keeping the accuracy intact has been the moto of PBNS and I believe we have been successful in this."

He further said, "Our PBNS Twitter handle is growing in the country. At the same time, our telegram has been very popular. Our daily magazine has been received well. So with all that, the tech-based system which has been created to bring all the newsgathering on one platform has been received well by the Doordarshan and Akashavani."

So with all of that, it has been a great endeavour to keep both speed and accuracy intact for the new set up, he said.

Talking about this, Kumar said that there has been great support that we are able to achieve some great milestones and that is that itself that we are celebrating third year and first year of the daily magazine.

It is notable that Prasar Bharati News Service was started on 13th May, 2019. (ANI)