Get latest articles and stories on India at LatestLY. Women voters are set to play a decisive role in the upcoming civic body elections as in 14 out of 20 urban local bodies the number of women voters are higher than those of men. 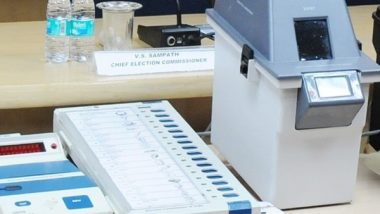 Agartala (Tripura) [India], October 26 (ANI): Women voters are set to play a decisive role in the upcoming civic body elections as in 14 out of 20 urban local bodies the number of women voters are higher than those of men.

Elections to 20 urban local bodies in all the eight districts in the state will go to polls on November 25 and the results will be announced on November 28.

According to final electoral rolls published in the month of January, a total of 5,94,772 people were found eligible to exercise their universal adult franchise where the number of total female voters stood at 3,00,777. The rest of the 2,93,979 voters are male excluding a few voters who are from the transgender category.

The data revealed that in six Nagar Panchayats the women voters have outnumbered the men.

All these Nagar Panchayats are located across eight districts of Tripura. Similarly, in Agartala Municipal Corporation, the only corporation of the state, the number of total female voters stands at 1,74,758 against male electorates (1,70,467). In altogether seven municipal councils' female voters have come out as the dominant force leaving the men behind.

The numbers further explain the story, the female electorates will have the larger say in deciding the fate of political outfits entering the poll battle. All the parties have to do a good ground work to woo the female support which is a must to emerge victorious. There are a total of 334 seats in the 20 urban local bodies that comprise of six Nagar Panchayats, 13 Municipal Council and one Municipal Corporation. (ANI)