Uttar Pradesh Chief Minister Yogi Adityanath on Saturday hit out at the opposition SP, saying they call themselves as socialists but only the Saifai family flourishes in the party. Saifai is the native place of Akhilesh Yadav, who heads the party. 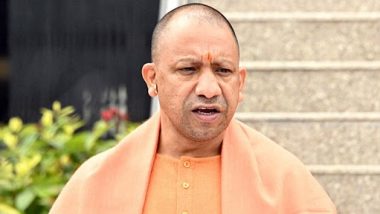 Ambedkar Nagar, February 26: Uttar Pradesh Chief Minister Yogi Adityanath on Saturday hit out at the opposition SP, saying they call themselves as socialists but only the Saifai family flourishes in the party. Saifai is the native place of Akhilesh Yadav, who heads the party.

"But the slogan of these so-called socialists is 'sabka saath, Saifai parivar ka vikas' (support of all and development of Saifai family)," Adityanath said attacking the Samajwadi Party. He said in 1960, Dr Lohia started the Ramayana Mela.

"Now, his present followers shoot Ram bhakts," he said, apparently referring to police firing at "kar sevaks" in Ayodhya when Mulayam Singh Yadav was the chief minister of the state. Adityanath alleged that previous governments in the state pilfered the ration meant for the poor.

"For those who ate the poor's ration, we've bulldozers. The power of a bulldozer is such that it is used for the construction of the Purvanchal expressway as well as to raze properties of dishonest and corrupt leaders," he said.

The CM also invoked the legacy of Maharaja Suheldev, who he said had defeated and killed invader Ghazi Saiyyad Salar Masood in a battle at Bahraich.

"People doing politics in the name of Maharaja Suheldev are working against his ideology today. I believe followers of Suheldev cannot stand with Ghori and Ghaznavi," he said, adding that for them nationalism is supreme, not the caste, creed or religion.

Adityanath also claimed that the BJP will get an absolute majority in the UP Assembly polls and the party has swept the first four phases of the elections.

"Once again, the BJP will cross the 300-seat mark," he said. He appealed to voters to vote for the BJP for a riot-free state. Ambedkar Nagar will vote in the sixth phase on March 3.

Later speaking in Ballia, Adityanath said that the SP builds the boundary of graveyards while they "beautify the temple of Bhrigu Baba". Bhrigu was one of the seven great sages, the Saptarshis and the first compiler of predictive astrology.

Adityanath on this occasion said, "Earlier, electricity had caste and religion. "It used to come during Eid and Muharram and disappear during Holi and Diwali."