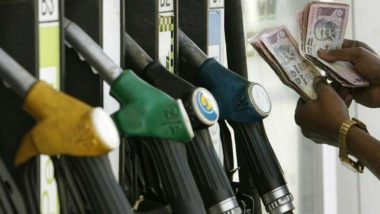 New Delhi, July 7: The price of petrol crossed Rs 100-mark in the national capital and stood at Rs 100.21 per litre on Wednesday.

"Petrol price is increasing every day. It was at Rs 99 yesterday and today it has crossed Rs 100. We hope the price of petrol decreases as soon as possible so that the public can get relief," said Sankalp.  Dilip Kumar, Best Known as Tragedy King, Dies at 98

Another resident Dilip Kumar said that the increasing fuel prices have broken the backbone of the public.

Rates have been increased across the country and differ from state to state depending on the incidence of value-added tax.

The fuel prices continue to soar across the country and have crossed Rs 100 in many states.

Meanwhile, Congress has decided to launch a 10-day nationwide agitation against inflation from July 7.

"Moved by the plight of the people already suffering on account of the COVID pandemic, rampant unemployment and salary cuts, the Congress Party has decided to launch nationwide agitation programs at Block, District and State levels.

These programs shall be implemented by the State units between July 7 and July 17, 2021. It shall comprise Congress Party Leaders, AICC frontal organisations including Mahila Congress leaders and members, aided by scores of ordinary party workers all over the country," reads a Congress statement.