Get latest articles and stories on India at LatestLY. Prime Minister Narendra Modi on Friday extended a greeting on Jagannath Rath Yatra in Puri and wished for everyone's good health and happiness. 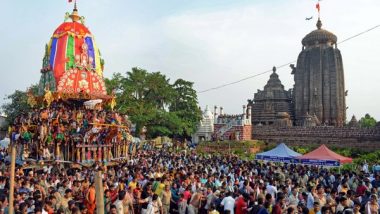 "Greetings on the special day of Rath Yatra. We pray to Lord Jagannath for his constant blessings. May we all be blessed with good health and happiness," PM Modi said in a tweet.

The Pahandi rituals for the Rath Yatra of Lord Jagannath began in Odisha's Puri. The participation of devotees in the Rath Yatra has been allowed this time after a gap of two years following the COVID pandemic.

After due rituals, the three Raths of Lord Jagannath, Devi Subhadra and Lord Balabhadra have been pulled and put stationed in front of the Singha Dwara of the Shreemandira on Thursday itself.

Also Read | Facebook Starts Testing NFTs With Select Creators in the US.

PM Modi also shared a clip of what he had said about the Rath Yatra and its importance in Indian culture during the Mann Ki Baat on June 26.

Emphasising the role of the Yatras in Indian culture, the Prime Minister in his monthly radio broadcast Mann Ki Baat had said the pilgrimages in the country do not just offer spiritual vibes but also create opportunities to serve the poor.

"Upanishads mention a life mantra-'Charaiveti-Charaiveti-Charaiveti'. It means keep going, keep going. This mantra is so popular in our country because it is part of our nature to keep moving and be dynamic. As a nation, we have come this far through a journey of development spanning thousands of years," he had said in the 90th episode of 'Mann Ki Baat'.

"Our cultural mobility and travels have contributed a lot to this. That is why our sages and saints had entrusted us with spiritual responsibilities like a pilgrimage. All of us go on varied pilgrimages," he said.

PM Modi said a large number of devotees participated in the Chardham Yatra this year.

Referring to Lord Jagannath Rath Yatra, Prime Minister said, "In our country, different Dev-yatras also take place time to time. In Dev Yatras, not only the devotees but also our Gods go on a journey. In just a few days from now on July 1, the famous journey of Lord Jagannath is going to commence. All of us are familiar with the Puri yatra in Odisha. People make efforts to ensure that on this occasion they get the good fortune of going to Puri."

The Ratha Yatra, also known as the Chariot Celebration of Lord Jagannath, Devi Subhadra, and Lord Balabhadra, is the most prominent Hindu festival in the Puri city of Odisha. This festival takes place every year on the second day of the Shukla Paksha in the months of June or July. This year the festival falls on July 1.

The three chariots are built a new, every year ahead of the annual chariot festival.

Vibrant colours, enthusiastic faces, crowded shops, and cheery craftspeople are just a few of the highlights of Rath Yatra in Puri, the popular Chariot celebration held on a big scale every year outside Jagannatha Temple. (ANI)