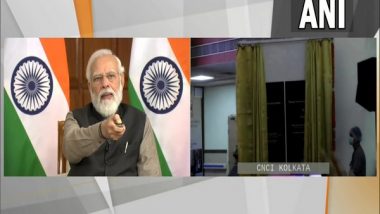 "The second campus of CNCI has been built in line with the Prime Minister's vision to expand and upgrade the health facilities in all parts of the country. CNCI was facing a heavy load of cancer patients and a need for expansion was being felt for some time. This need will be fulfilled through the second campus," a statement issued by the Prime Minister's Office said.

Also Read | Uttar Pradesh Shocker: Man Beaten to Death by Friends For Refusing to Pay Money For Alcohol in Saharanpur.

The second campus of CNCI has been built at a cost of over Rs 530 crore, out of which around Rs 400 crores have been provided by the Union government and the rest by the West Bengal government, in the ratio of 75:25. The campus is a 460 bedded comprehensive cancer centre unit with cutting-edge infrastructure for cancer diagnosis, staging, treatment, and care.