Prime Minister Narendra Modi on Thursday hit out at the Congress over Punjab Chief Minister Charanjit Singh Channi's 'UP, Bihar ke bhaiya' remark and said that the party always pits people of one region against another. 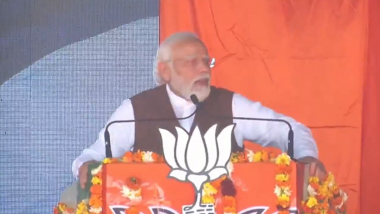 Fazilka, February 17: Prime Minister Narendra Modi on Thursday hit out at the Congress over Punjab Chief Minister Charanjit Singh Channi's 'UP, Bihar ke bhaiya' remark and said that the party always pits people of one region against another.

Addressing an election rally in Abohar, PM Modi also said that the BJP government will assure the security and development of Punjab. "Congress always pits the people of a region against another. Congress CM gave a statement yesterday that received claps from a member of the family in Delhi. Who are they insulting by such statements? There is not one village here where people from UP-Bihar don't toil," he said. Also Read | Manipur Assembly Elections 2022: From CM N Biren Singh To Ratankumar Singh, Here Are Five Key Candidates Contesting Phase 1 State Polls.

"Where was Guru Govind Singh born? In Patna Sahib, in Bihar. Will you remove Guru Govind Singh from Punjab? People of such divisive mentality should not be allowed to rule Punjab even for one moment," said PM Modi.

"Only yesterday we observed Sant Ravidas Jayanti. Where was he born? In Uttar Pradesh, in Varanasi. Will you remove Sant Ravidas from Punjab?" he added. He also said that Punjab needs a government that is inspired by patriotism.

"Today, Punjab needs a government that draws inspiration from patriotism for its development. The BJP has come before you with dedication, with the resolve of security and development of Punjab," he said.

He further said that it is the BJP-led government at the Centre that has implemented the long-pending recommendations of the Swaminathan Commission.

"History is witness that Congress always betrayed farmers. There was a long pending demand to implement recommendations of the Swaminathan Commission. They just kept sitting on those files. When we formed our government at the Centre, we implemented the recommendations," added PM Modi.

He said under the Pradhan Mantri Awas Yojana, more than 75 thousand hoses are being built in Punjab. "Punjab alone has been given an amount of more than Rs 2,000 crore for pucca houses," he added.

The Prime Minister said that under the PM Kisan Samman Nidhi, the central government has deposited Rs 3,700 crore directly in the bank accounts of farmers of Punjab, adding that about 23 lakh farmers of the state have benefited from the scheme.

He also said the farmers of Punjab need a government that has a new thought process and vision. The farming community wants good produce with lesser investment, which a BJP government can ensure, he added. He said that no industrialist is willing to invest in Punjab due to the policies of the ruling Congress government.

"If BJP is voted to power in Punjab election 2022, the 'double engine sarkar' at Centre and state will ensure investment in the state," said PM Modi.