Ahead of Punjab the Assembly elections, Prime Minister Narendra Modi will address a public rally in Firozpur district on January 5. This will be the first rally of PM Modi in Punjab after the repeal of three farm laws. 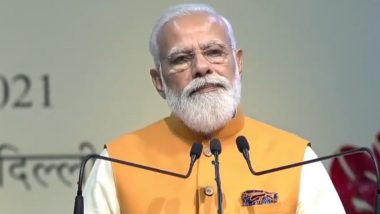 Firozpur, January 2: Ahead of Punjab the Assembly elections, Prime Minister Narendra Modi will address a public rally in Firozpur district on January 5. This will be the first rally of PM Modi in Punjab after the repeal of three farm laws.

The Prime Minister is also scheduled to inaugurate a satellite center of the Postgraduate Institute of Medical Education and Research (PGIMR) in Punjab's Firozpur. He is also likely to address a rally after the event. Also Read | Tamil Nadu Govt to Commence Virtual Treatment for COVID-19 Patients, Says Health Minister Ma Subramanian.

Punjab Chief Minister Charanjit Singh Channi is also likely to attend the event at PGIMR. The political rally by PM Modi assumes much significance as he will be joined by former Punjab Chief Minister Captain Amarinder Singh. Also Read | Goa Aims to Vaccinate All 72,000 Children in 15-18 Age Group With First Dose in Next 4 Days, Says Vishwajit Rane.

Reacting to the proposed rally by PM Modi, Aam Aadmi Party's Raghav Chadha said, "BJP can hold as many meetings as they want but they would not be able to win even a single constituency."

The Shiromani Akali Dal has stated that they will not let the Prime Minister hold any rallies until the demands of farmers are not fulfilled. Recently, Shiromani Akali Dal (SAD)'s former MLA Jagdeep Singh Nakai and close aide of Sukhbir Singh Badal joined the Bharatiya Janta Party (BJP) .

The three farm laws were repealed by Prime Minister Narendra Modi on November 19. These bills were passed during the winter session of Parliament in 2020.

The farmers, who had been protesting on the borders of Delhi against the three laws for almost a year, have suspended their agitation on December 9 and returned to their homes. The Assembly polls in Punjab will be held in 2022.

In the 2017 Punjab Assembly polls, Congress won an absolute majority in the state by winning 77 seats and ousted the SAD-BJP government after 10 years.